Trans women are often the subject of social stigma, but they have also made great strides worldwide. In a world that sometimes seems to be full of hardship for trans women, there is also light and positivity. They can be found in all walks of life: from doctors to athletes to celebrities and everything in between! 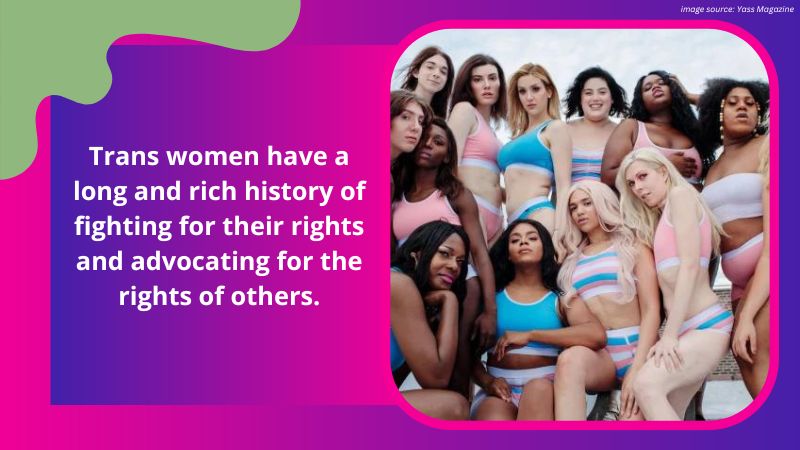 Trans women have a long and rich history of fighting for their rights and advocating for the rights of others. They have been at the forefront of many important social and political movements. And they have made significant contributions to art, science, and other areas of human achievement. It is important to recognize and celebrate the contributions of trans women and all trans individuals, and to work towards creating a more inclusive and accepting society for all.

The trans women in this article have worked hard to overcome the barriers to success that have been put in their way because of their gender. They have all faced discrimination and prejudice, and they’ve overcome those obstacles to achieve success. Here are some of the most notable trans women and their accomplishments. 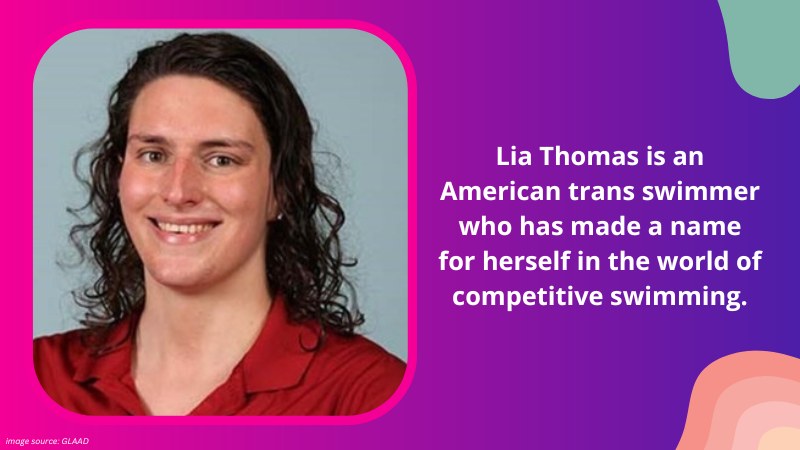 Lia Thomas is an American trans swimmer who has made a name for herself in competitive swimming. She began her transition while attending the University of Pennsylvania in 2017, joining the men’s swimming team. However, transitioning came with its own set of challenges and difficulties, including depression. Despite these obstacles, Lia underwent hormone replacement therapy (HRT) during her sophomore year in 2019. This decision, while significant for her journey, also raised questions about her future in competitive swimming. Despite these challenges, she has continued to persevere and advocate for trans visibility and rights.

In March of 2022, Lia Thomas became the first transgender athlete to win an NCAA Division I title after winning the women’s 500-yard freestyle event. After graduating from the University of Pennsylvania in May, she says she is focused on making it to the Olympics. Lia Thomas has received backlash on why she competed in the women’s division because she is a transgender woman. However, she wants to clarify that trans athletes are not a threat to female competitors. Through her resilience, Lia Thomas made a name for herself as a role model and leader in the trans community. Her impact and influence will continue to be felt for years to come. 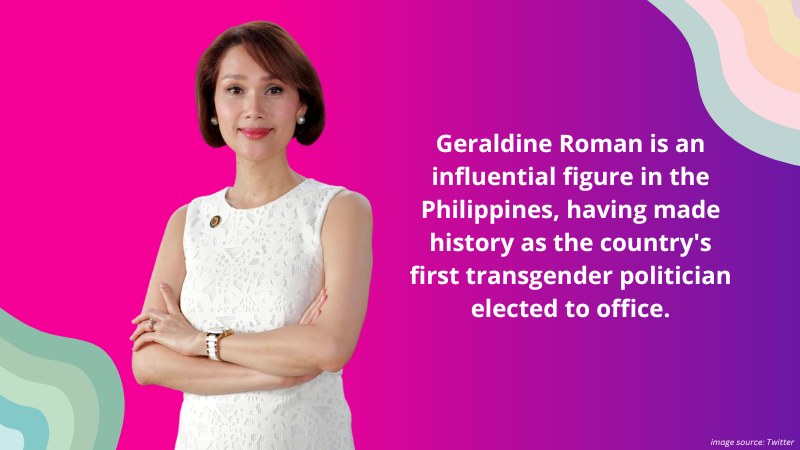 Geraldine Roman is an influential figure in the Philippines, having made history as the country’s first transgender politician elected to office. She is a historic figure in the Philippines because she overcame the strong religious beliefs of its majority Catholic population. Born in 1967 in Bataan, Philippines, Roman grew up in a political family and was always interested in public service. Though Roman was raised Catholic, she did not accept that her gender identity was sinful or unnatural—she believes it is God-given, and says she had always felt like a girl. However, as a transgender woman in a deeply conservative and traditional society, Roman faced significant challenges and discrimination. 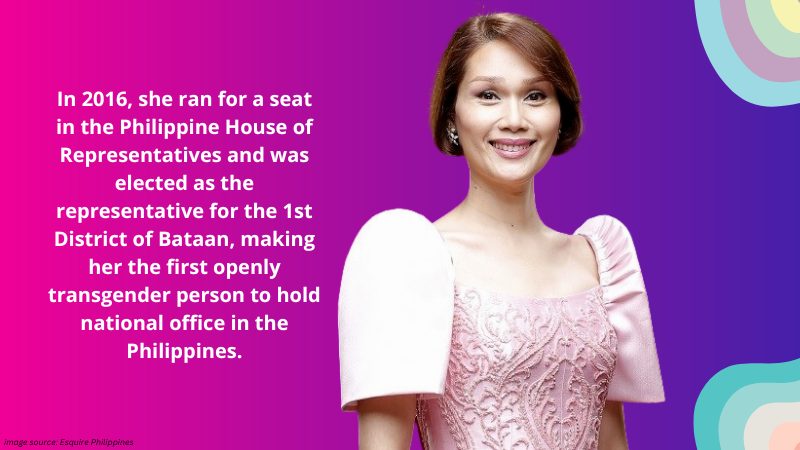 Despite these obstacles, Roman persevered and pursued her dreams of public service. In 2016, she ran for a seat in the Philippine House of Representatives. She was elected as the representative for the 1st District of Bataan, making her the first openly transgender person to hold national office in the Philippines. Roman’s election was a major milestone for transgender rights and visibility in the Philippines. She has used her platform to advocate for the rights of the LGBTQ+ community. In addition to fighting for equal rights and representation, Roman has also focused on issues such as healthcare, education, and poverty alleviation. Roman has proven to be a trailblazer and an inspiration to transgender people worldwide. 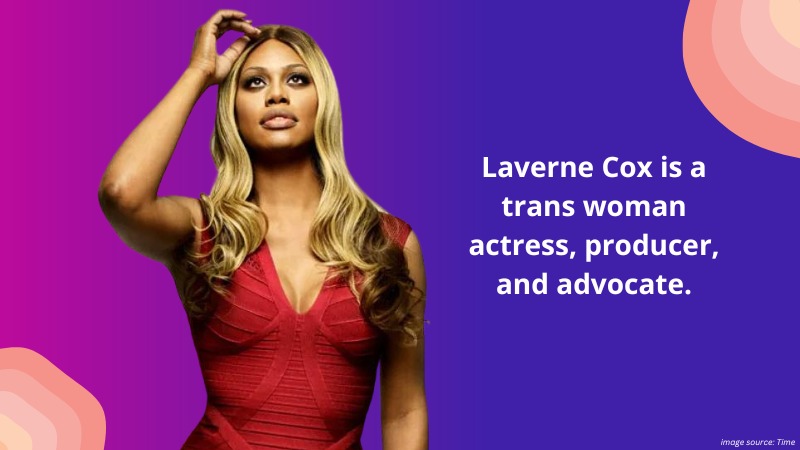 Laverne Cox is a trans woman actress, producer, and advocate. Born in Mobile, Alabama, in 1972, Cox faced significant challenges and discrimination as a transgender woman growing up in the deep south. Despite these obstacles, she pursued her dreams of acting and entertainment, and eventually made her way to New York City. She had her breakthrough in 2013, when she was cast as Sophia Burset on the hit Netflix series “Orange is the New Black.” Her portrayal of a trans woman in a leading role was groundbreaking. Cox became the first openly transgender person to be nominated for a Primetime Emmy Award in an acting category. 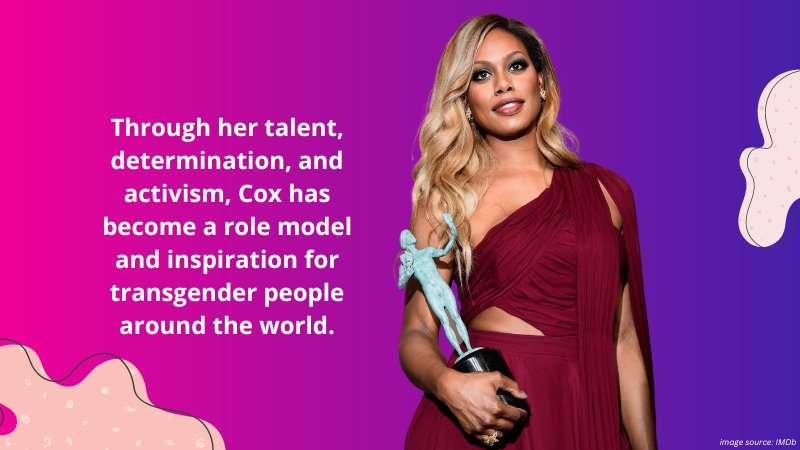 In addition to her successful acting career, Cox has become a vocal advocate for transgender rights and visibility. She has given numerous talks and interviews on the subject. She has used her platform to raise awareness about the unique challenges and discrimination faced by trans individuals. Through her talent, determination, and activism, Cox has become a role model and inspiration for transgender people worldwide. She has helped to break down barriers and challenge negative stereotypes. She will continue to be a powerful voice for change and acceptance in the years to come. 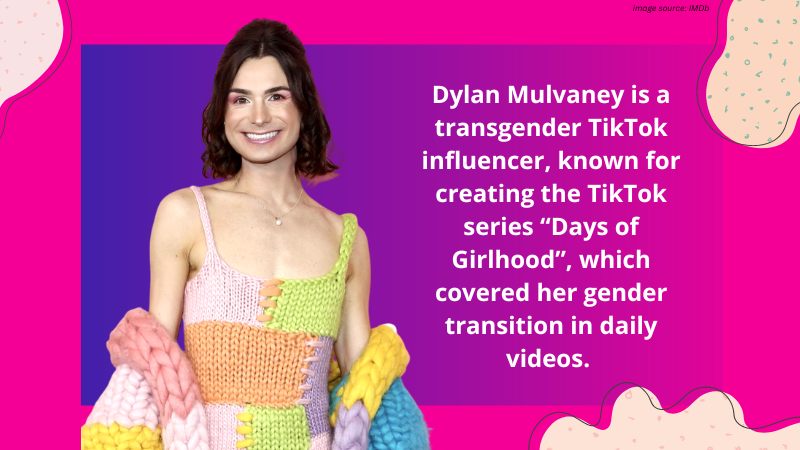 Dylan Mulvaney is a transgender TikTok influencer, known for creating the TikTok series “Days of Girlhood”, which covered her gender transition in daily videos. She has been uploading videos on TikTok since March of 2022, and she’s seen incredible success. She started to chronicle her transition as and her daily life videos and quickly garnered millions of followers. Her daily videos from “Days of Girlhood” have gotten her fans from across the globe. 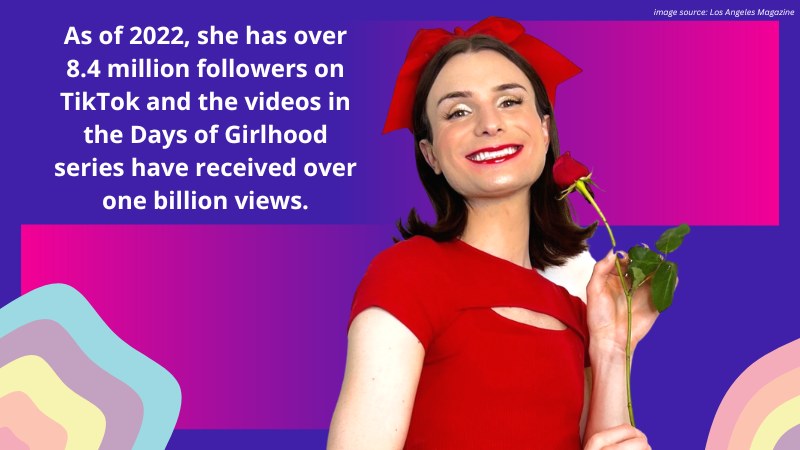 The way she approaches each video is like a FaceTime with a friend. She tries to keep it as raw and real as possible, making her so relatable. As of 2022, she has over 8.4 million followers on TikTok, and the videos in the Days of Girlhood series have received over one billion views. Dylan gushed that she was unsure what she would recommend other trans people do to express their gender identities because doing so has made her a target of hatred and criticism. However, she continues to fight for her womanhood outside of TikTok as well.

Nikkie De Jager, also known as NikkieTutorials, is a Dutch makeup artist and beauty influencer who gained popularity on YouTube for her makeup tutorial videos. De Jager is known for her creative makeup looks and her ability to transform herself using makeup. She has a large following on social media and has worked with several well-known beauty brands. In January 2020, De Jager made headlines when she came out as a transgender woman in a video on her YouTube channel, which received widespread attention and support.

The LGBT community is a force to be reckoned with. Nikkie de Jager, said an episode of “RuPaul’s Drag Race” inspired her to show her followers how drastically you can change your appearance with makeup. This shows how influential and inspiring the community can be. The impact they have on others is even greater when they can be their true selves. This is why it’s so important to support LGBT causes. Not only do we get to share in their joy, but we also get to be inspired by them as they live out their dreams and make a difference in the world. 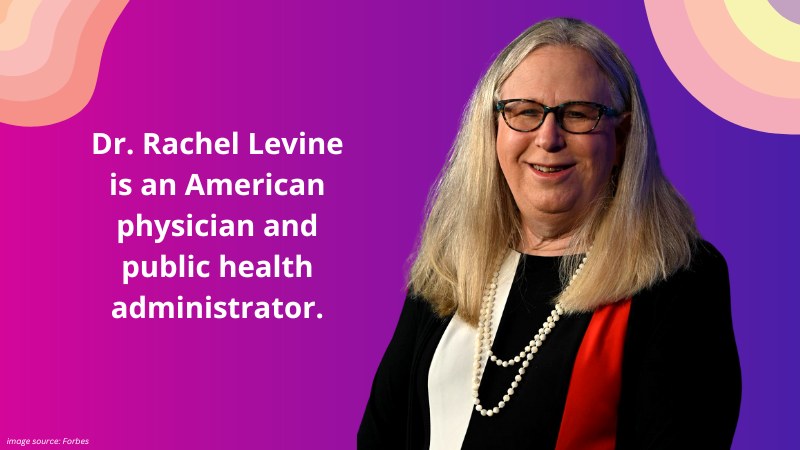 Dr. Rachel Levine is an American physician and public health administrator. She is known for her work in pediatrics and adolescent medicine, as well as her expertise in public health issues such as the opioid epidemic and HIV/AIDS. She’s also a SHE-ro for the transgender community, serving as an advocate for the medical needs of trans patients. Dr. Rachel Levine has also received attention for her advocacy for transgender and gender non-conforming individuals. 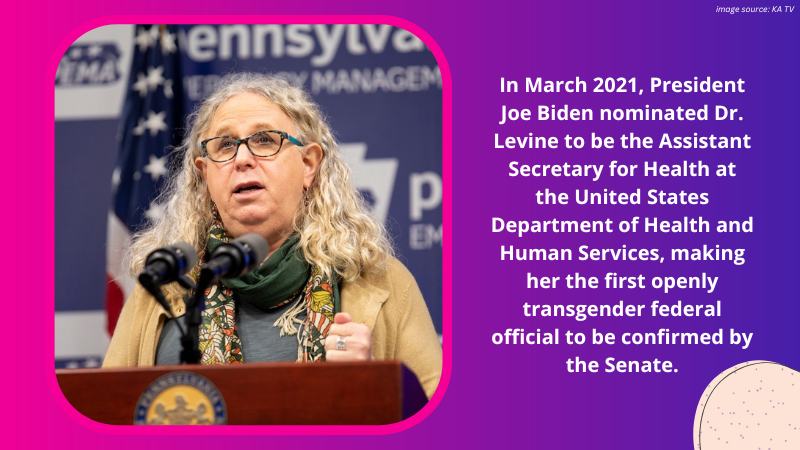 In March 2021, President Joe Biden nominated Dr. Levine to be the Assistant Secretary for Health at the United States Department of Health and Human Services, making her the first openly transgender federal official to be confirmed by the Senate. Dr. Levine is also the highest-ranking openly transgender official in the federal government. 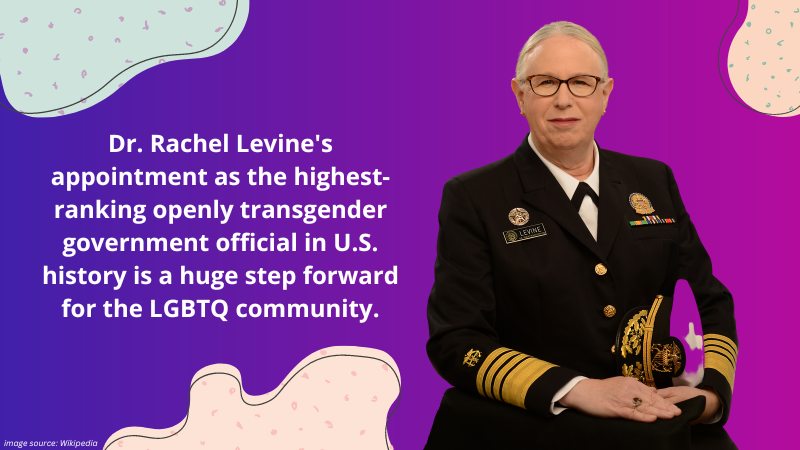 Dr. Rachel Levine’s appointment as the highest-ranking openly transgender government official in U.S. history is a huge step forward for the LGBTQ community. With current attempts to roll back protections for trans people and other marginalized communities, it’s more important than ever that we have leaders like Dr. Levine who are willing to speak up against injustice and fight for what’s right. 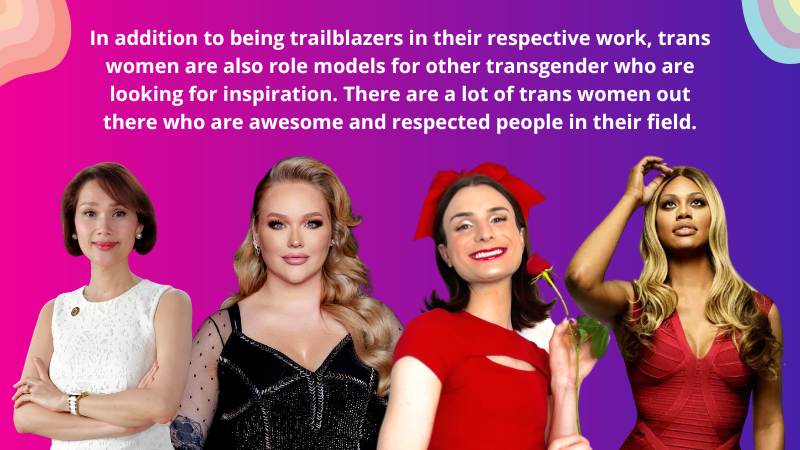 Trans women are notable for their achievements in science, politics, and art. They continue to make their mark on society and make significant contributions and achievements in various fields. In addition to being trailblazers in their respective work, trans women are also role models for other transgender people looking for inspiration. There are a lot of trans women out there who are awesome and respected people in their field. You can find them on the internet, on TV, and also in real life!