In the decades after world war two, there was a prominent conservative uprising in the Americas. Censorship was applied to major movies in the United States, and cross-dressing was illegal in most cities. But in 1959, years before the stonewall riots, a movie challenged gender roles. Cross-dressing is at the plot’s core in a way that defies conventional Hollywood norms from the time. 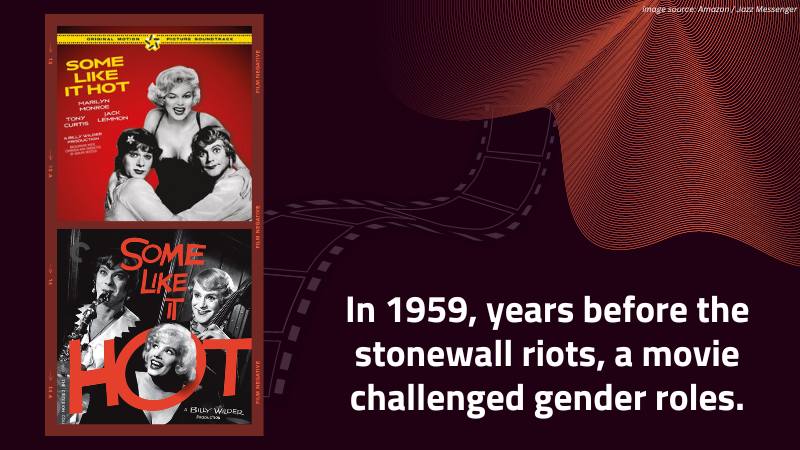 It’s different from most films from the 1950s and 1960s, as it doesn’t depict cross-dressing as a bad thing. It uses clever humor to make the situation more light-hearted, even though it’s still humorous. Besides that, the movie shows us that cross-dressers still deserve love and happiness. If you want to learn more about it before watching, check out this article! 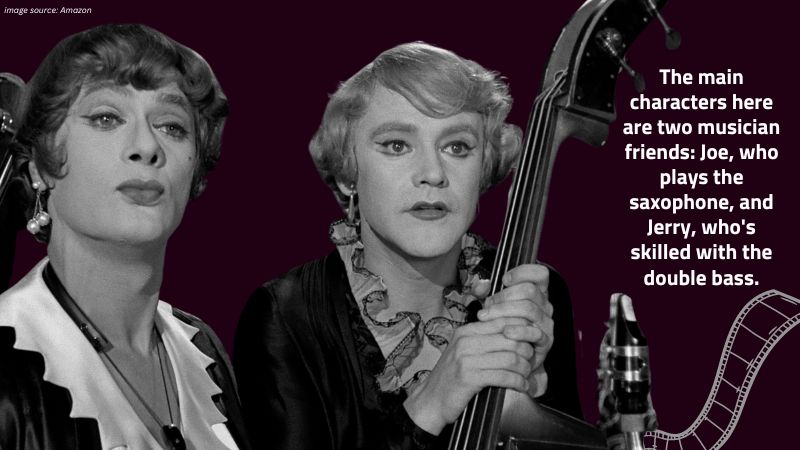 The main characters here are two musician friends: Joe, who plays the saxophone, and Jerry, whos skilled with the double bass. They are shown to be looking for work in 1929 Chicago when they witness a Mafia shootout. The mobsters notice them, and a pursuit ensues, but they can’t find anywhere to hide. But then, they remember an all-female band looking for a bassist and a sax player who is departing to Miami. 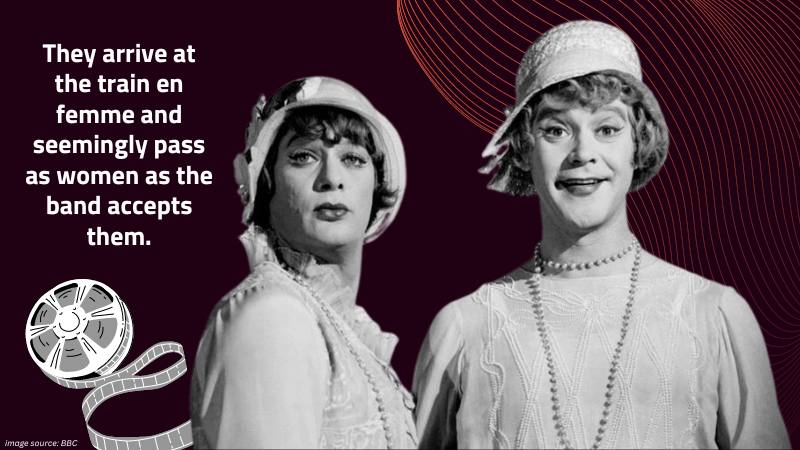 Joe sees it as an opportunity to escape the Mafia, so he calls their manager. He gets them both into the band by making a female voice impression on the phone. They arrive at the train en femme and seemingly pass as women as the band accepts them. So they depart with them, trying to keep their true identities hidden. This is the basic premise of the plot. The following paragraph has more details but may contain spoilers! 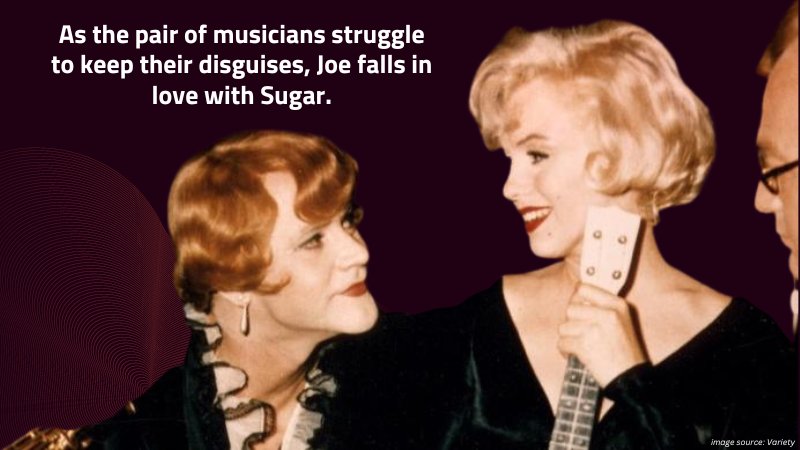 As the pair of musicians struggle to keep their disguises, Joe falls in love with Sugar. She’s one of the original band’s members, played by none other than Marilyn Monroe. He occasionally breaks off his disguise to talk to Sugar, trying to pass as a Miami millionaire to Impress her. In the meantime, a real millionaire called Osgood falls in love with “Daphne,” who’s secretly Jerry in his female disguise. 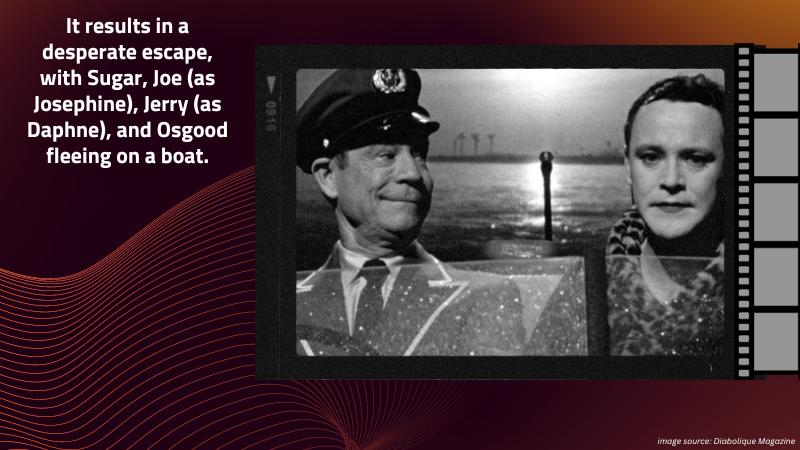 They keep up with this ruse until the Mafia catches up to them, seeing through their disguises. It results in a desperate escape, with Sugar, Joe (as Josephine), Jerry (as Daphne), and Osgood fleeing on a boat. Joe confesses everything to Sugar, and they both share a kiss. Jerry, still pretending to be Daphne, becomes engaged to Osgood. But both seem to stay together even after he confesses to being a man. 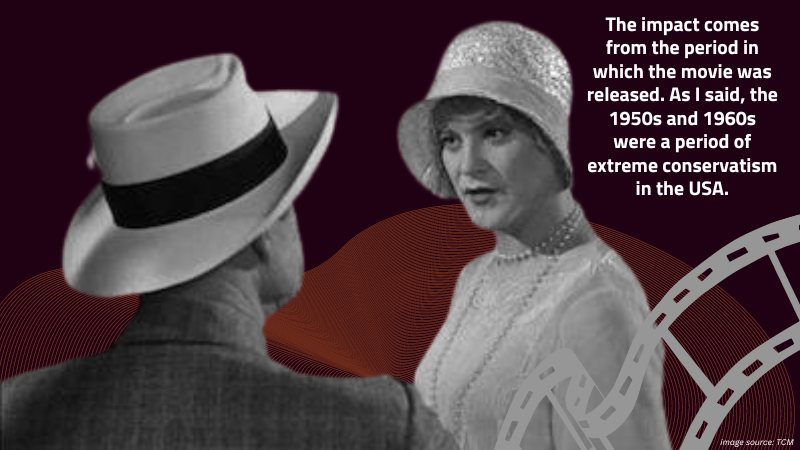 The impact comes from the period in which the movie was released. As I said, the 1950s and 1960s were a period of extreme conservatism in the USA. There were rare occasions when transvestism was allowed on screen. When It did, It was to make fun of cross-dressers and LGBTQ people. But the queerness of this movie comes on a good note. It uses clever humor instead of predictable stereotypes. 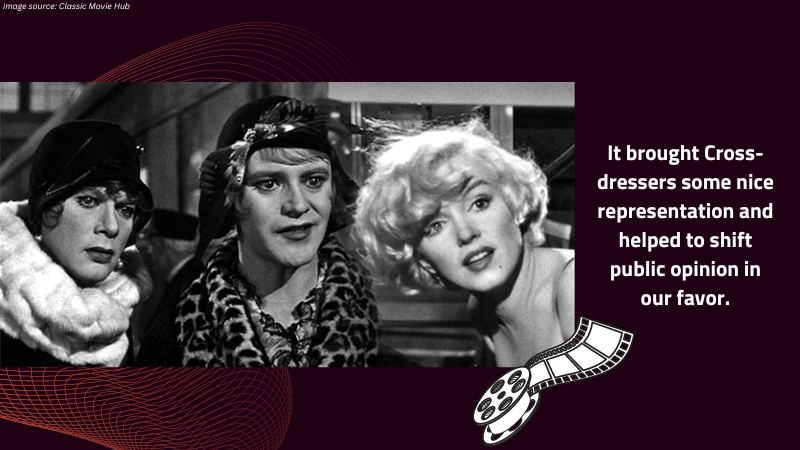 It brought cross-dressers some nice representation and helped to shift public opinion in our favor. Also, it had a unique way of dealing with gender and sexuality issues that defied the norms imposed by the conservatives. It shows those things as something natural instead of a permanent taboo. As such, many viewers left the movie tethers after this film, wondering why shouldn’t they talk about it. 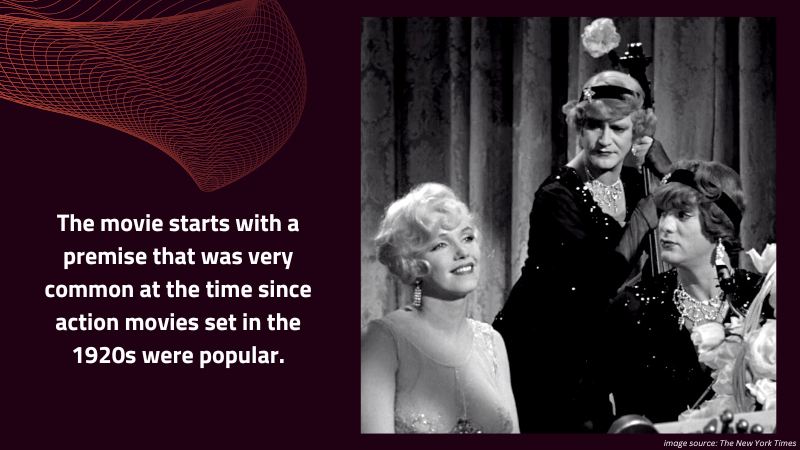 The movie starts with a premise that was very common at the time since action movies set in the 1920s were popular. The memories of Al Capone and Prohibition were still fresh. As such, Mafia thrillers had many viewers. But “Some Like it Hot” manages to subvert the expectations. It shifts the narrative to a delicate subject and includes light-hearted jokes. 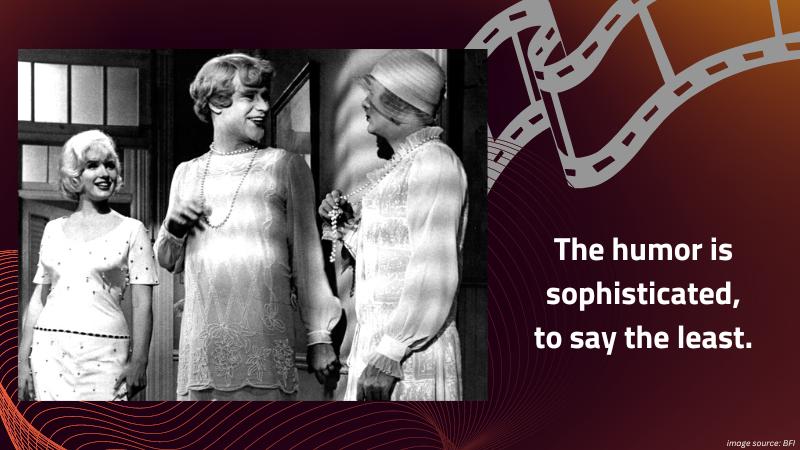 The humor is sophisticated, to say the least. Some jokes require a bit of historical knowledge. But others are pretty funny for cross-dressers, as the characters struggle with stuff that we still do today. After all, cross-dressing is still cross-dressing even after half a century. We can relate to some of the stuff Joe and Jerry are going through. 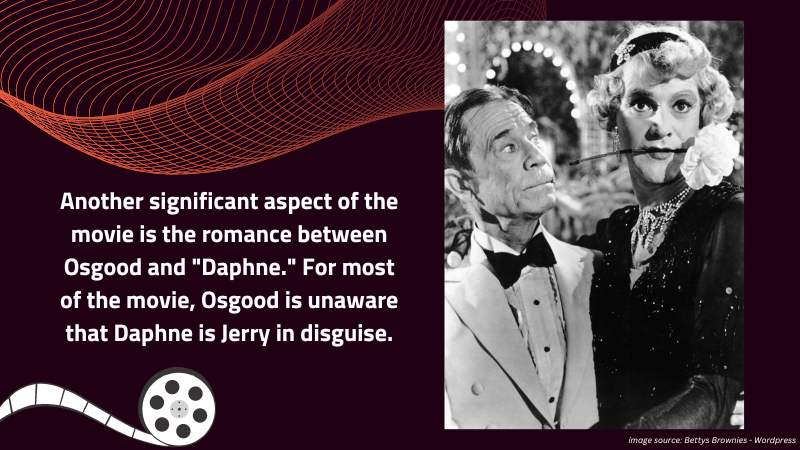 It even seems like this was intentional so queer people of the time could enjoy the movie. Another significant aspect of the movie is the romance between Osgood and “Daphne.” For most of the movie, Osgood is unaware that Daphne is Jerry in disguise. But when they become engaged, “She” seems happy about it. And after the disguise is undone, Osgood doesn’t seem to care. This makes for a delightful experience. For people of all ages, genders, and sexualities, that is. One that is difficult to compare to anything else, even in recent years. And the fact that this movie is over 60 years old makes us wonder why it is still so difficult to find quality movies with queer protagonists. 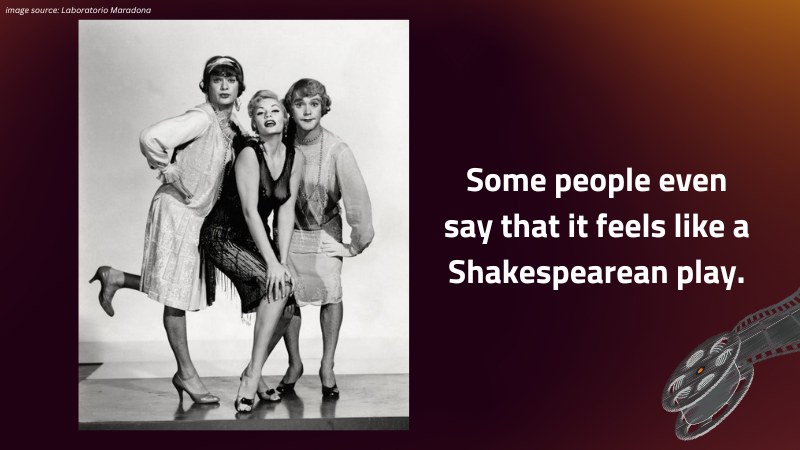 Despite the absurd aspects of some situations, the characters feel real and appealing. And the best part is that this movie doesn’t even try to be realistic with anything else. The Mafia, the police, the band. None of them behave in the movie as they would in the real world. It’s supposed to be like that, and that’s what makes this movie so endearing. Some people even say that it feels like a Shakespearean play. It shares many similarities with some of Shakespeare’s works, after all. By that, I mean excellent character development, clever jokes, and cross-dressing as a plot device. 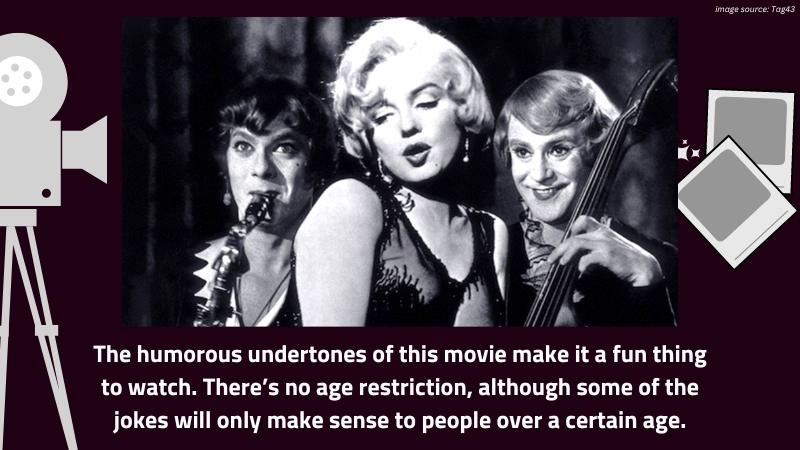 The humorous undertones of this movie make it a fun thing to watch. There’s no age restriction, although some of the jokes will only make sense to people over a certain age. Children won’t get them, which is a good thing. Its positive portrayal of cross-dressing makes it suitable as an educational tool. This kind of thing teaches a valuable lesson about being yourself and respecting others, which should be learned from a young age. It also has an excellent cast with renowned actors, making it an instant classic. If you’re a cinephile or a fan of “cult movies,” you should watch it. These are generic yet valid reasons for everyone to check out this film. But what about LGBTQ people? What makes it important to them? 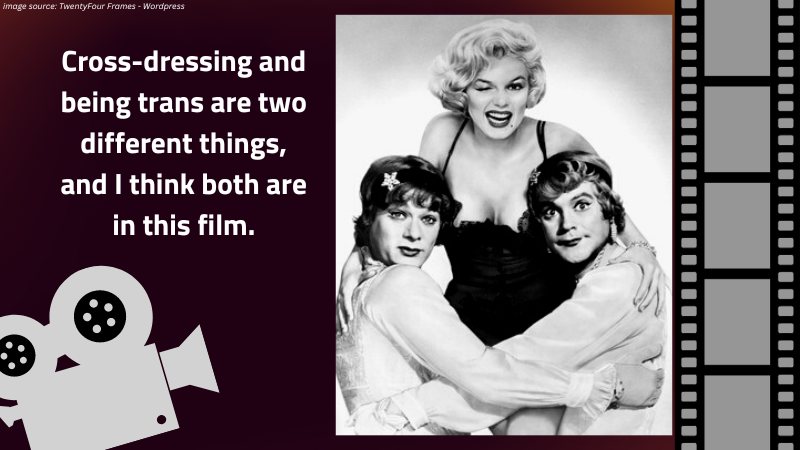 It’s important to them because of its backstory and historical value. As for our sisters, I believe that both cross-dressers and trans women would enjoy it. Cross-dressing and being trans are two different things, and I think both are in this film. Joe, when dressed up as Josephine, is cross-dressing. He does not, at any moment, feel comfortable being a girl. He wants to be able to go back to being Joe at the end. But Jerry seems different. He was the first to come up with the idea while they were still looking for work. 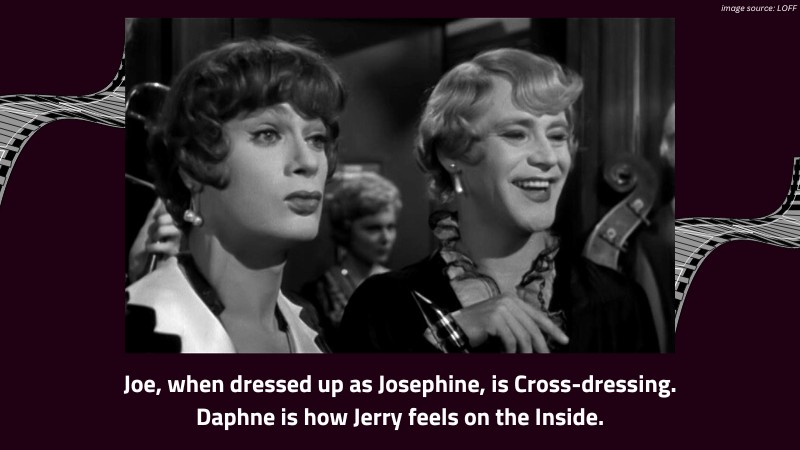 He shows interest in behaving as a woman and is much more comfortable in a dress than Joe. And after all that, he says he chose the name Daphne because he always liked it, while Joe chose Josephine because it feels familiar. Being happy with the idea of an engagement with Osgood is another factor. It could make us think Jerry is gay. But with the other clues we get through the movie, it seems that “he” is better off as a She. Daphne is how Jerry feels on the Inside. And that, not the fact she likes Osgood, Is what makes her a trans woman in my interpretation. 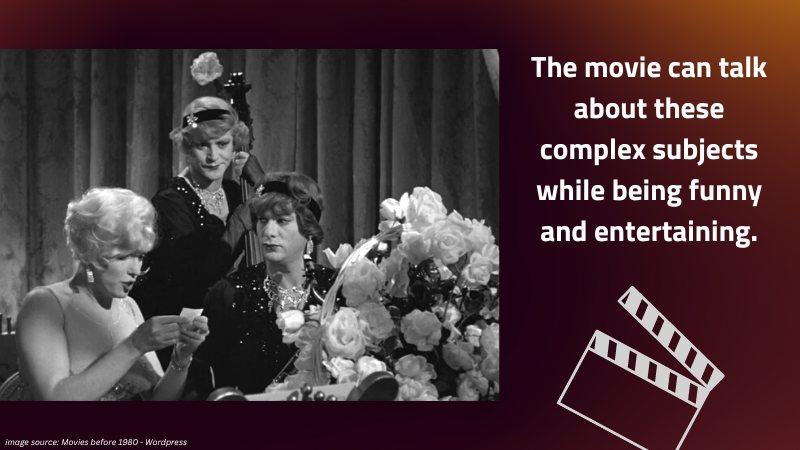 The movie can talk about these complex subjects while being funny and entertaining. It’s hard to imagine any other works that do the same. In the end, anyone can watch it and have a good time. But the experience is different for cross-dressers and trans people. We feel what the characters are feeling. We see ourselves in them. And it brings us an extraordinary sensation of comfort and understanding. Many of our sisters are looking for this kind of representation. And they wouldn’t expect it from a movie from this period. Finding out about it was a pleasant surprise, and I believe you’ll have a good time watching it—no matter your gender, age, or sexual orientation.

The movie is a work of art and an essential piece of our history. Its clever humor and progressive ideas made it relevant for the 1960s queer community. But our sisters of today may find it just as important. Its depiction of cross-dressing is accurate and doesn’t try to make us look ridiculous. Besides that, it manages to undo the taboos by using the right kind o humor. It’s not offensive, but it is comical enough to bypass the censorship in the USA. Director Billy Wilder did an excellent job while creating appealing characters to whom the queer community could look up. And the actors played them perfectly, adding believability even to the most absurd situations.

This is my recommendation to you and all of our sisters. As such, I would love to hear your impressions of the movie. Whenever you see it, or if you already have, tell us about it in the comments!