Miss Gay America is one of the most prestigious and well-known pageants for MTF crossdressers in the United States. Each year, contestants from across the country take part in a week-long series of events. This culminates in a grand finale where one lucky drag queen is crowned Miss Gay America. 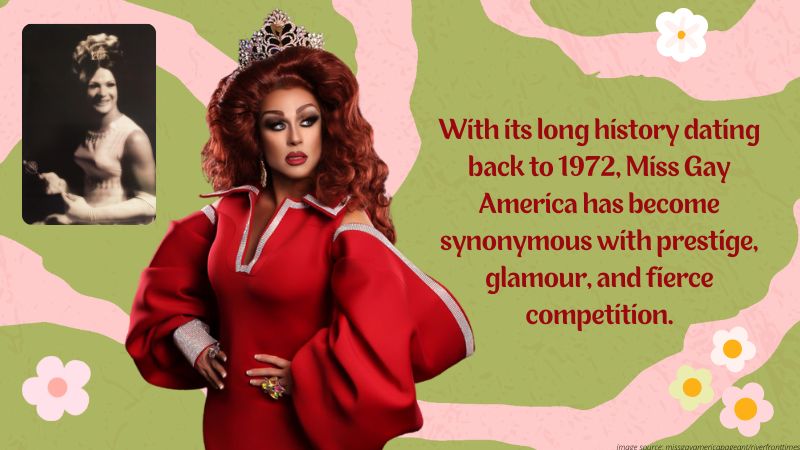 With its long history dating back to 1972, Miss Gay America has become synonymous with prestige, glamour, and fierce competition. Whether you’re looking to socialize or simply enjoy watching some truly stunning performances by the nation’s top drag queens, there’s something for everyone at this iconic pageant.

So, if you’re ready to be amazed by the best that MTF crossdressing has to offer, don’t miss out on Miss Gay America! I’ll give more details below. Take some notes!

1. What is Miss Gay America, and what does it entail? 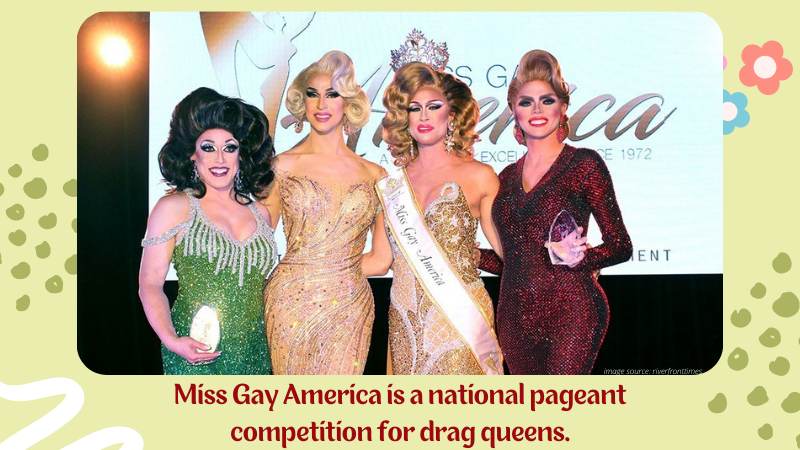 Miss Gay America is a national pageant competition for drag queens. It was founded in 1972, and it has become the premier event of its kind in the United States. 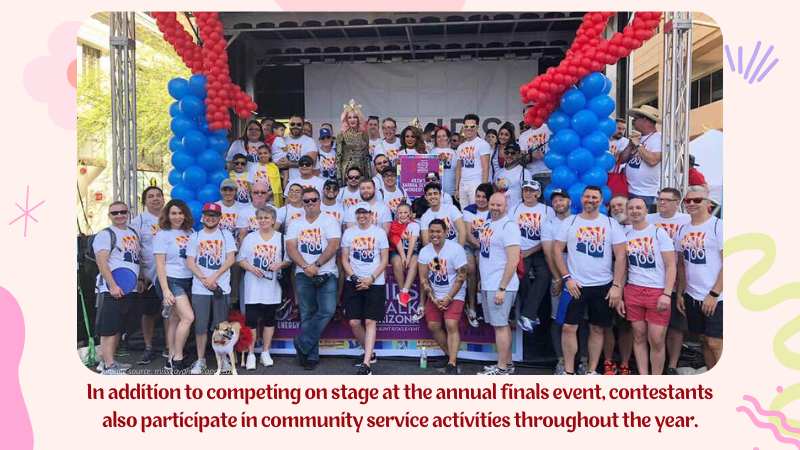 Contestants compete in various categories, including evening gown, swimwear, talent, interview, and Q&A. In addition to competing on stage at the annual finals event, contestants also participate in community service activities throughout the year. The winner represents her state as Miss Gay America for one year and then passes on that title to another lucky queen.

2. How did the pageant start, and who are some of its most famous winners? 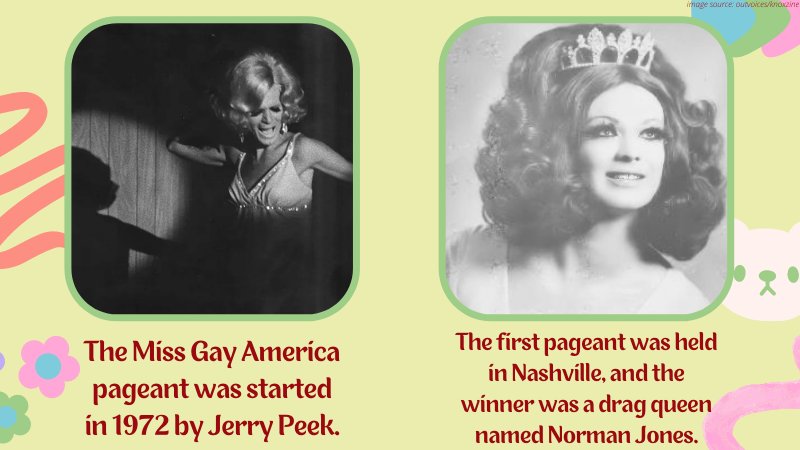 The Miss Gay America pageant was started in 1972 by Jerry Peek, a former drag queen from Memphis, Tennessee. The first pageant was held in Nashville, and the winner was a drag queen named Norman Jones. 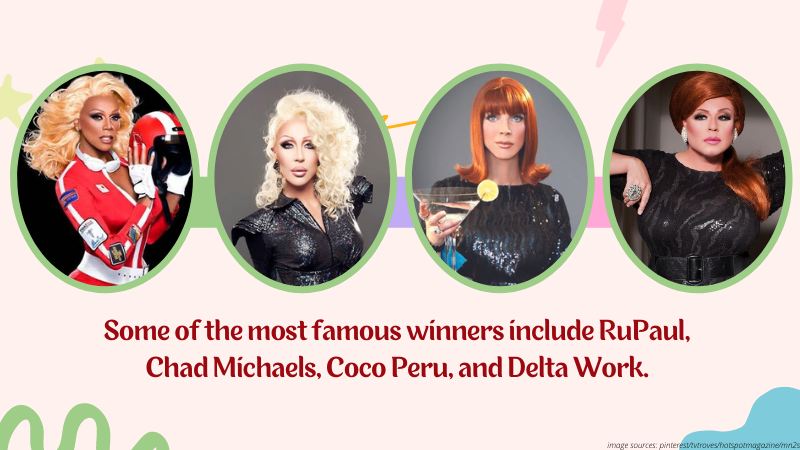 Since then, the pageant has become one of the most prestigious events in the drag community, with queens coming from all over the country to compete. Some of the most famous winners include RuPaul, Chad Michaels, Coco Peru, and Delta Work. 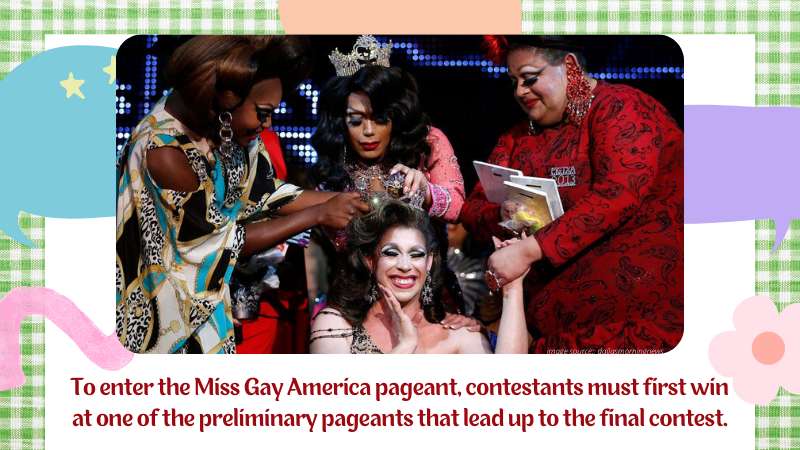 To enter the Miss Gay America pageant, contestants must first win at one of the preliminary pageants that lead up to the final contest. These preliminary pageants usually take place throughout different states across the US from October through January, with each state sending its winner to the national-level competition. 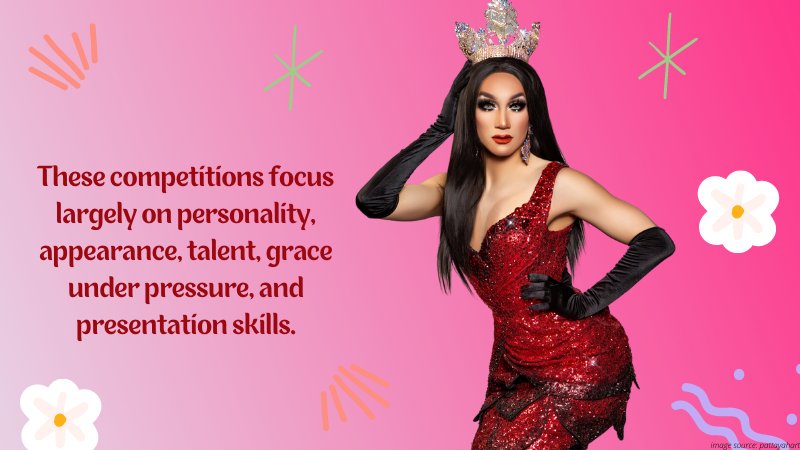 These competitions focus largely on personality, appearance, talent, grace under pressure, and presentation skills. In short, you have to be charming and photogenic! You should also act like a lady at all times, whether on stage or offstage.

So, if you love being in the spotlight and enjoy performing Infront of people, then the Miss Gay America pageant could be for you! Just remember to brush up on your talent routine and know how to answer questions gracefully under pressure. Good luck!

4. How has the pageant evolved over the years, and what controversies have arisen because of it? 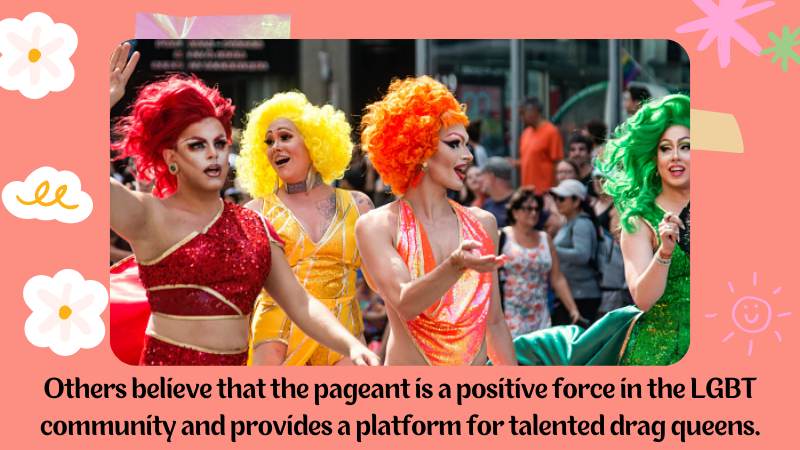 The Miss Gay America pageant has been around for over 40 years and has seen many changes during that time. Among the most contentious aspects of the pageant is the use of drag queens to compete. This has led to some contestants feeling like they are not judging base on their own merits, but instead, on how well they can imitate a woman. There have also been complaints about the lack of diversity among the contestants and judges.

Some people feel that the pageant does not do enough to promote body positivity and acceptance of all types of people. However, others believe that the pageant is a positive force in the LGBT community and provides a platform for talented drag queens to showcase their skills.

One of the most controversial debates has been over whether or not to judge contestants on their ability to impersonate a woman or if they should compete based on talent and personality alone.

Alyssa Edwards was Miss Gay America, 2010, but she was later dethroned by the organization. Since then, Alyssa has become a popular reality TV star, dancer, and choreographer.

The reason for her dethroning has been speculative, some believe that the drag queen engaged in activities that went against the contract she signed with the pageant. Some say that Alyssa Edwards lost her throne because she was in a photo with a man out of drag.

Many people have criticized the pageant for focusing too much on looks instead of talent, and some believe that this contributes to discrimination against transgender women who may not pass as cisgender women but are still eligible to compete. 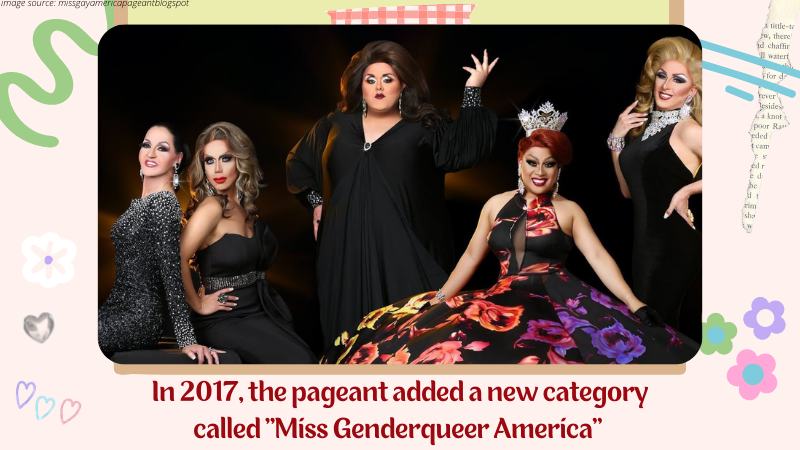 In recent years, the Miss Gay America pageant has made an effort to be more inclusive. In 2017, the pageant added a new category called “Miss Genderqueer America” in order to allow contestants who do not identify as either male or female to compete. The pageant has also expanded its definition of what it means to be a woman, now allowing transgender women and non-binary people to compete.

While they have made some progress in terms of inclusion, there is still room for improvement. For example, many people believe that the pageant should do more to promote body positivity and acceptance of all types of people.

The Miss Gay America pageant is an important event in the LGBT community. It provides a platform for talented drag queens to showcase their skills and compete for a coveted crown. Despite its flaws, it is still a positive force in the community and continues to be popular among both contestants and viewers alike. Whether you agree or disagree with the pageant’s approach, there is no denying that it has made an impact on drag culture over the years.​

5. Why participate in or watch Miss Gay America, what effect does it have on the LGBTQ community as a whole? 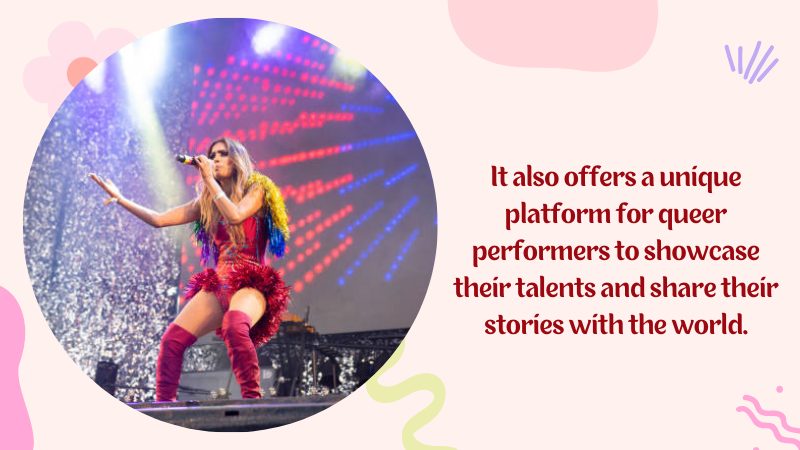 This is a rather weird question, but I’ll answer it anyway.

In a nutshell, there are several reasons why people participate in or watch Miss Gay America. For starters, the pageant has achieved widespread popularity and legitimacy within the LGBTQ community over its nearly 50-year history. So many individuals feel compelled to be involved in some way. At the same time, it also offers a unique platform for queer performers to showcase their talents and share their stories with the world. 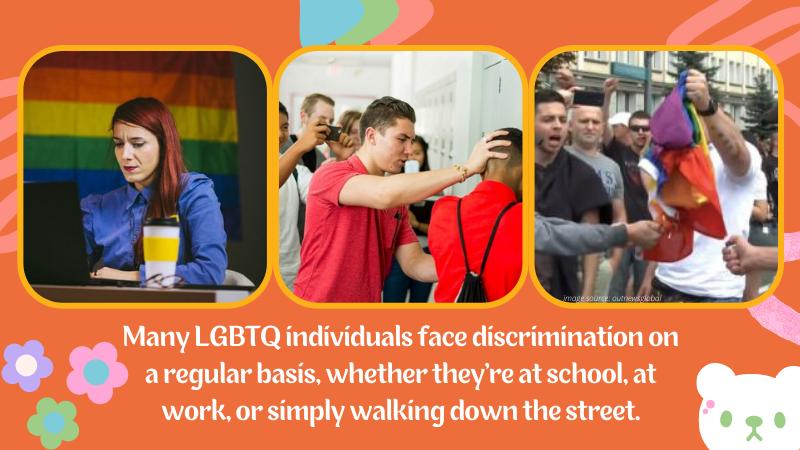 Beyond this, there is also an element of escapism with participating in or watching Miss Gay America. Many LGBTQ individuals face discrimination on a regular basis, whether at school, at work, or simply walking down the street. By taking part in this pageant or watching it from afar, they can temporarily forget about these challenges and enjoy a bit of light-hearted fun.

It’s worth noting that the Miss Gay America pageant has a positive effect on the LGBTQ community as a whole. It helps to demystify negative stereotypes about queer people. It also provides visibility for a group that is often marginalized and discriminated against. In other words, it helps to create a more inclusive and understanding world for everyone.

6. What are some of the challenges the Miss Gay America the competition face? 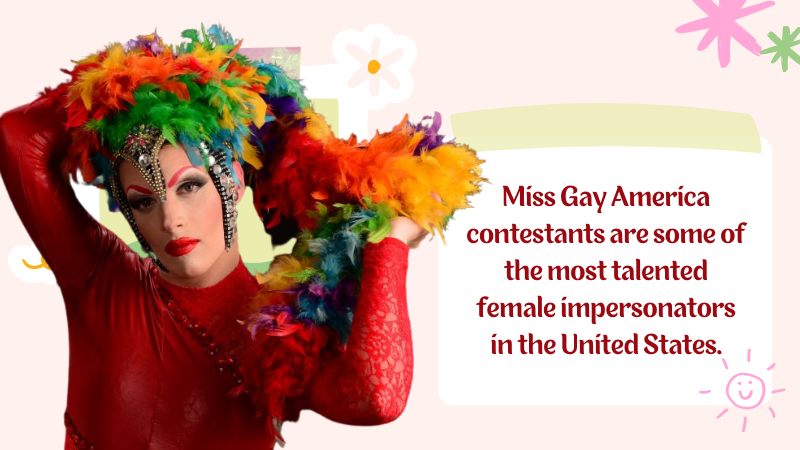 Miss Gay America contestants are some of the most talented female impersonators in the United States. They invest thousands of dollars into their looks and skills. And competing in front of a live audience only adds to the spectacle as each contestant vies for your attention! 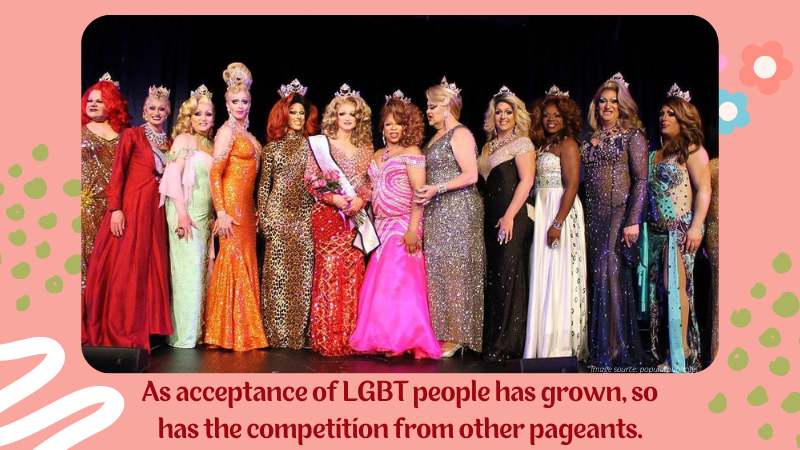 However, since its inception, the pageant has faced many challenges, both from within and without the LGBT community. One major challenge has been finding sponsors willing to support an event that is closely associated with LGBT. This has been difficult in recent years as many companies have become more conservative in their marketing and advertising strategies.

Another challenge facing the Miss Gay America competition is staying relevant in an increasingly accepting society. As acceptance of LGBT people has grown, so has not specifically geared towards female impersonators competition. 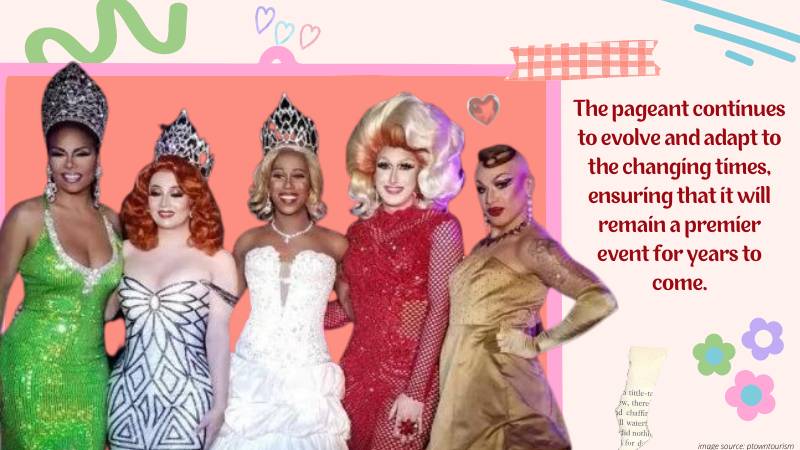 Despite challenges, the Miss Gay America competition remains one of the most popular pageants for female impersonators in the US. It continues to evolve and adapt to the changing times, ensuring it’ll remain a premier event for years to come.

The Miss Gay America competition is the longest-running and most prestigious pageant for female impersonators in the United States. The pageant was created in 1972 by Jerry Peek in Memphis, Tennessee.  It was a way to bring more visibility to the gay community. This was during a time when crossdressing was still very much taboo.

Over the years, the competition has grown to become a major event on the pageant circuit in the United States. Today, contestants from all over the country compete for cash prizes and the title of Miss Gay America.

One interesting aspect of the Miss Gay America is that it always takes place in a different city each year. This makes it an exciting competition to attend because attendees never know where they will be heading next! However, one thing remains consistent: It’s always quite a spectacle to catch.