Getting Familiar With Pride Symbols

When pride month arrives, you’ll see many different flags and symbols on the internet or even on the streets. They are all full of meaning, making them essential to the LGBTQ cause. But with many of them, it’s common to be confused if you’re unfamiliar with them. 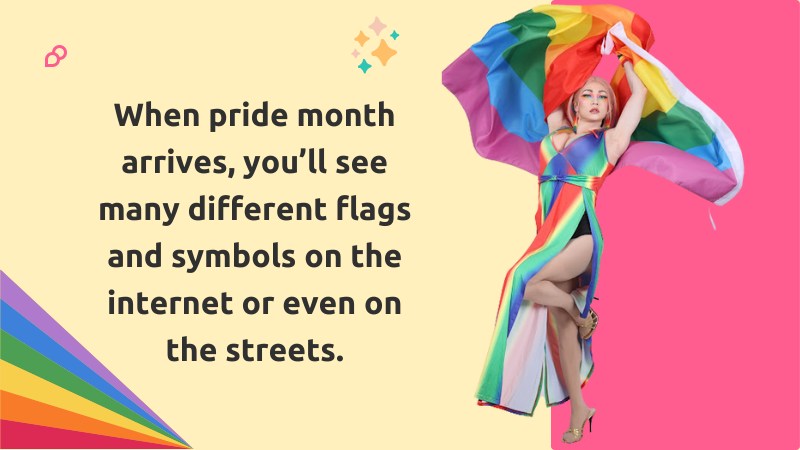 I want to help you avoid getting lost or confused by these symbols. There are some specific ones, while others are broad and general. If you’re curious about that and want to know which pride symbol represents you, make sure you read it until the end!

1. Who creates those symbols? 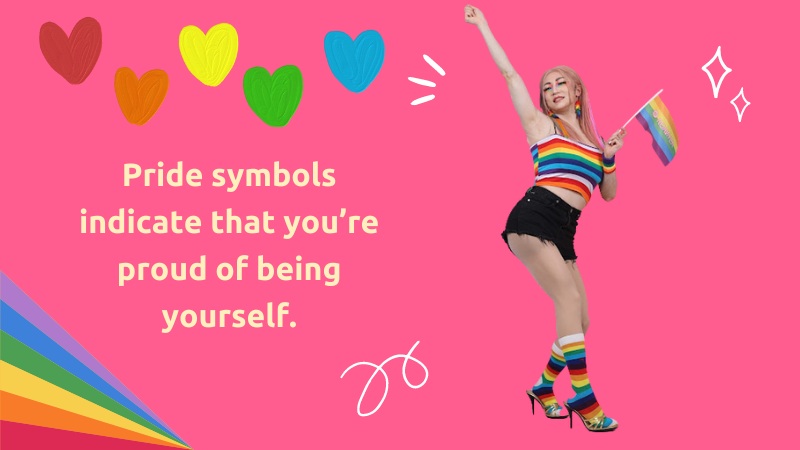 There are many pride symbols with unique meanings. They indicate that you’re proud of being yourself. There’s at least one for each different gender identity and sexual orientation. But who creates them? And what makes them valid?

There’s no law to regulate these symbols. The LGBTQ community itself validates them. Anyone can propose a new symbol at any time. And if people like it, it might become something official. I’ll explain the most important symbols, in two different sections. 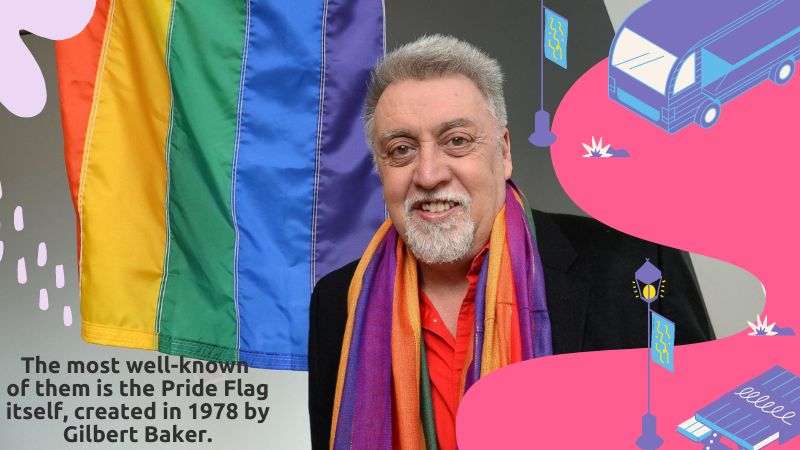 General symbols are the ones that are applied to the community as a whole. The most well-known of them is the Pride Flag itself, created in 1978 by Gilbert Baker. It was commissioned by Chicago supervisor Harvey Milk to celebrate the ten years anniversary of the Stonewall riots. The former’s murder made the flag itself a symbol for the LGBTQ community as a whole. 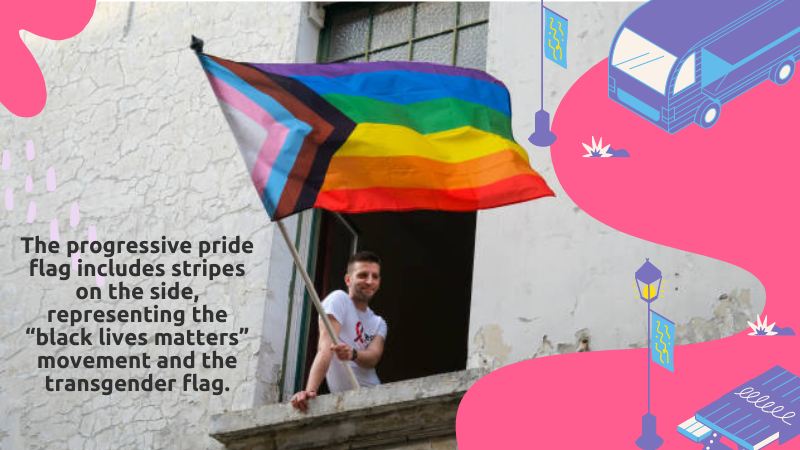 Many variations of this flag have appeared, such as the progressive pride flag. It includes stripes on the side, representing the “black lives matters” movement and the transgender flag. It was updated in 2021 to include the intersex spectrum. 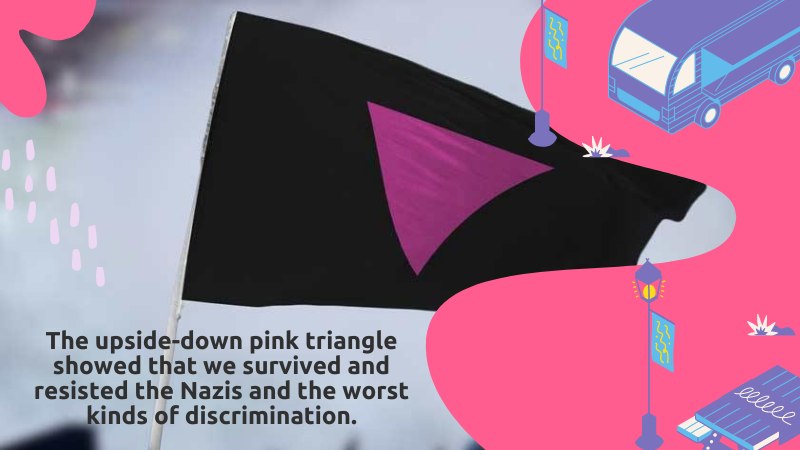 Another essential general symbol is the upside-down pink triangle. Back in the 1940s, during World War 2, pink triangles were used to mark homosexuals in Nazi Germany’s concentration camps. It was the worse possible manner of discrimination, as they had any rights denied. But nowadays, the LGBTQ community has re-purposed it as a universal pride symbol. It showed that we survived and resisted the Nazis and the worst kinds of discrimination. In other words, it’s a symbol of resistance for the LGBTQ community as a whole.

Besides the universal symbols and flags, we have specific ones. These are meant to represent each unique sexuality and gender identity we can think of. But of course, umbrella identities also have flags to make them easier to identify. Here I’ll describe the ones you’re more likely to see on the streets. 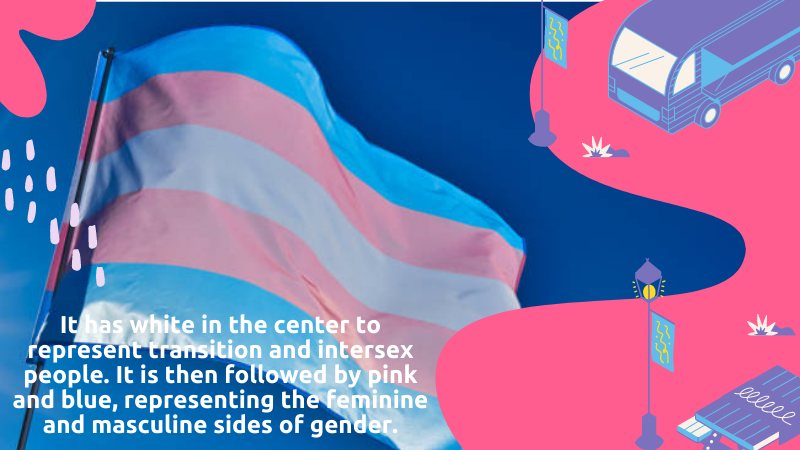 The Trans Pride Flag, like most gender flags, is composed of five colors. It has white in the center to represent transition and intersex people. It is then followed by pink and blue, representing the feminine and masculine sides of gender. These colors are mirrored, so the pattern remains correct no matter the way you fly it. This flag is more often used by binary trans genders, but it can represent the whole trans umbrella. Even so, non-binaries still have a proper flag, which I’ll talk about soon. 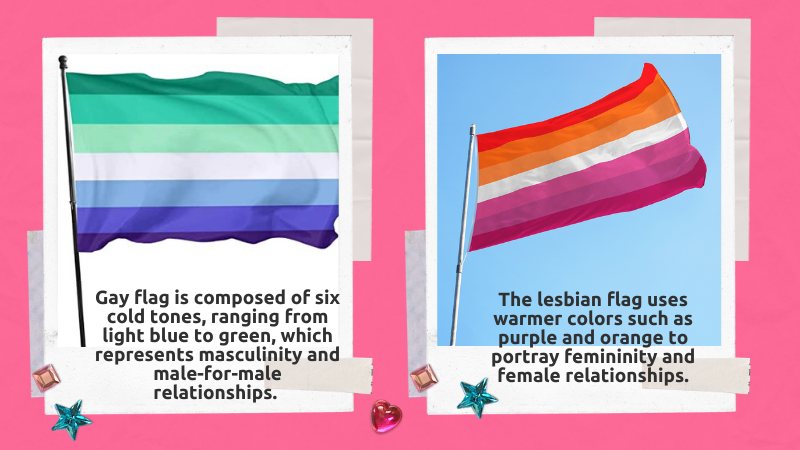 These flags are composed of six colors each. Even though gay men love to use the rainbow flag, there’s still another one specifically for them. It is composed of six cold tones, ranging from light blue to green. It represents masculinity and male-for-male relationships. The lesbian flag uses warmer colors such as purple and orange to portray femininity and female relationships. As for symbols, they generally use the arrowed gender circles in rainbow colors. But lesbians also use crossed axes as a personal symbol. 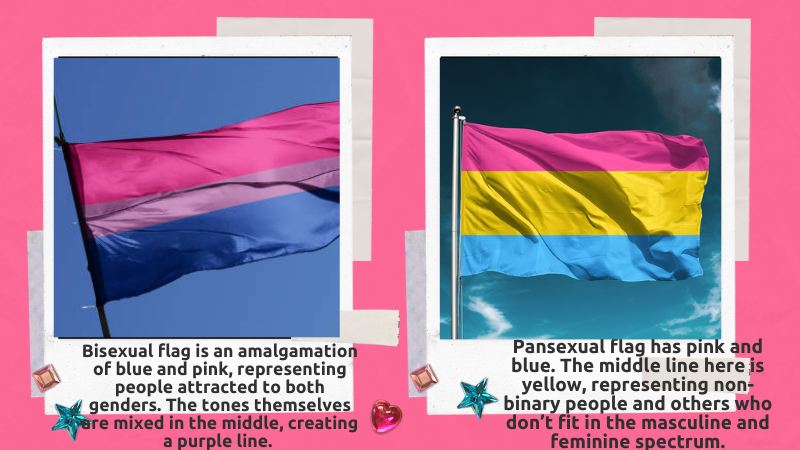 Still, there’s the three-colored bisexual flag. It is an amalgamation of blue and pink, representing people attracted to both genders. The tones themselves are mixed in the middle, creating a purple line. It is different from the pansexual flag, which tries to be more inclusive. It still has pink and blue, even though in brighter tones. But the middle line here is yellow, representing non-binary people and others who don’t fit in the masculine and feminine spectrum. Both flags are valid, as Bi and Pan are similar identities. The difference is in how the person perceives and deals with the concept of gender rather than sexual biology. 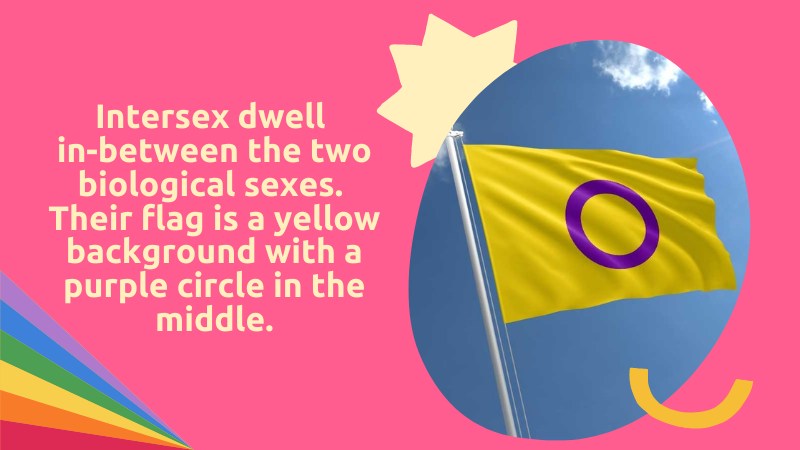 Some people are born with both male and female characteristics, biologically speaking. It is not rare to see babies being born with two genitals and varied hormones. Science classifies them as intersex, as they dwell in-between the two biological sexes. Many of them are forced to choose between male or female, and others have the decision made by their parents. But they are still part of the LGBTQ community and deserve their own flag. It is a yellow background with a purple circle in the middle. 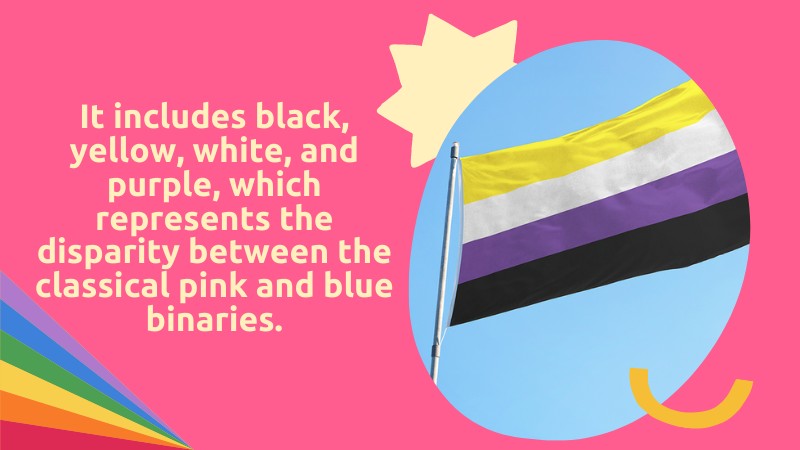 These are for people who identify as something other than just male or female. It covers all the other genders in a variety of different colors and includes black, yellow, white, and purple. It represents the disparity between the classical pink and blue binaries. This is widely used by non-binary identities, such as gender-fluid, bigender, and agender. But each one of them has a particular flag as well. The point here is that non-binary is also an umbrella term, and it’s easy to identify by the flag. 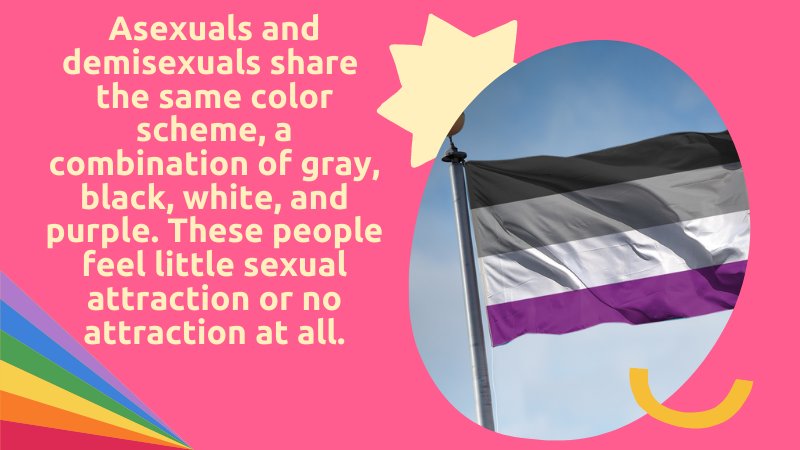 Asexuals and demisexuals share the same color scheme. That would be a combination of gray, black, white, and purple. These people feel little sexual attraction or no attraction at all. It’s important to include their flag in this list since more people join this identity each year. You’ll probably find a couple of these flags during a parade, so now you’re informed. In opposite to that, there are the aromantics or demiromantics. They might feel sexual attraction but no romantic, emotional attachment. They have almost the same flag as asexuals, except purple is replaced by green. 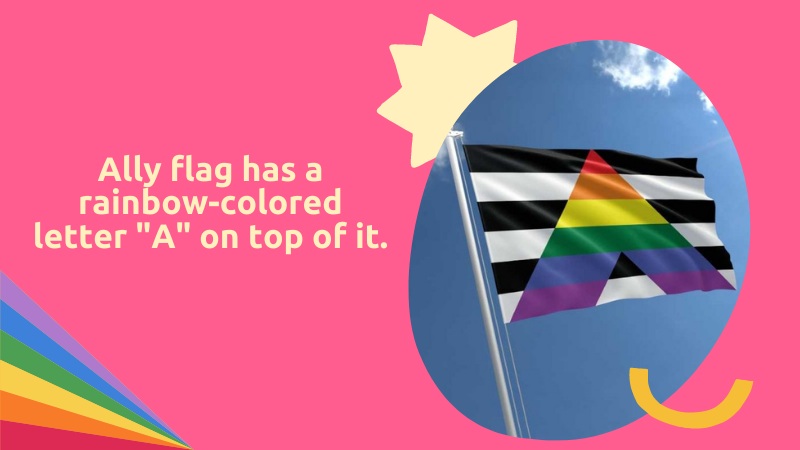 Allies are generally cisgender straight people who sympathize with our cause. And they have their own flag two! It is composed of two main elements. The first one is the straight pride flag. I know it’s rare, but it exists. The straight flag is nothing more than a bunch of black and white stripes. But the ally flag has a rainbow-colored letter “A” on top of it. It’s nice to include them here since our number of allies grows every year as well. 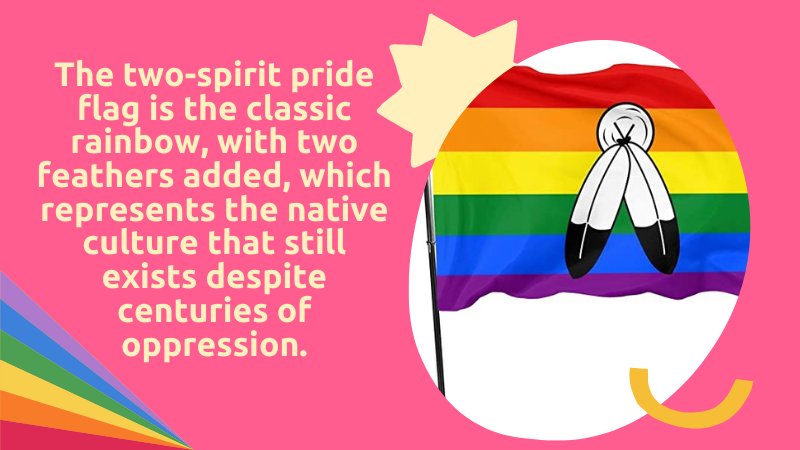 The very concept of gender varies between cultures. Conservative Western culture leans towards the “either male or female” paradigm. But Native Americans and other indigenous people have shown that they have a different interpretations. One of such is relatively common. Two-spirit is an intersection of feminine and masculine gender roles in native culture, and these people seek visibility. Their Pride flag is the classic rainbow, with two feathers added. It represents the native culture that still exists despite centuries of oppression, such as the rest of the LGBTQ community. 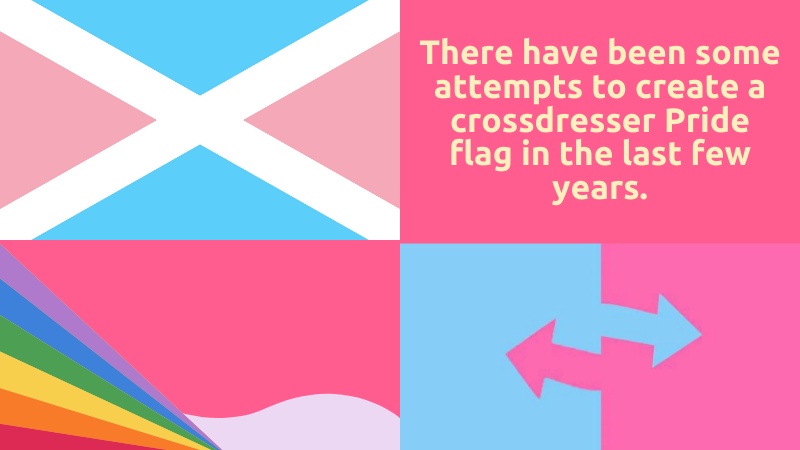 It seems like crossdressers are a minority in the LGBTQ community. Besides that, many of our sisters find themselves to be trans and adopt the transgender pride flag. I use the gender-fluid flag myself. But there have been some attempts to create a crossdresser Pride flag in the last few years. Some of them include a white X in the middle of the trans flag, and others have blue and pink arrows pointing to one another. I have even seen an elaborate flag with detailed pencils in the middle, highlighting the artistic side of crossdressing. However, none of those have gained enough popularity to be considered official. 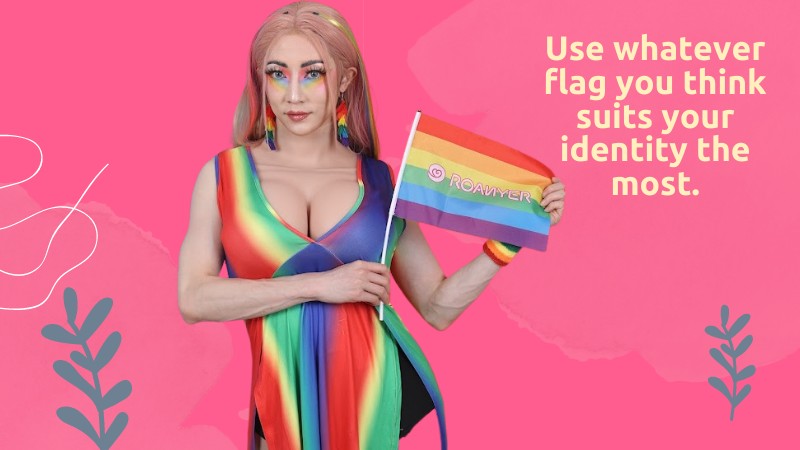 Crossdressing is quite a complex activity, with many different aspects. And it seems like it’s reflected in the different flag designs. What appeals to a portion of our sisters may not make sense to the others. Some of us dress up to deal with dysphoria. For others, it’s art or even a sexual fantasy. These differences are what make crossdressing unique, fun, and inclusive. But it’s almost impossible to fit all of that into a single flag. If we ever manage to do that, it will be a very meaningful symbol. For now, what you can do is use whatever flag you think suits your identity the most.

Flags have become an important aspect of Pride month. They represent not only identities and personalities but ideas as well. They are filled with meaningful designs and colors and, as the name suggests, are meant to inspire pride. Flags, after all, are made to be proudly flown. Symbols like those can help to unify and strengthen the bonds of our community. And that’s how we’ve been able to get so far in recent years. I wish a happy pride month for all of you and that you can be proud of who you are! Last but not least, I would love to hear what you think about it. If possible, leave a comment describing which pride flag you identify the most with!

After reading this article, which Pride symbol do you think has the biggest impact?