The Role of Media and Television in Increasing Crossdressing Awareness

Since they were first introduced, the role of television and media has increased exponentially. The most basic forms of media and television are print, radio, and the internet. The media plays a significant role in the widespread acceptance and prevalence of crossdressing.  With media and television, more and more people are becoming aware of crossdressing. This can be attributed to different television shows and movies featuring characters who crossdress. There may be stereotypes, but it still helps give more people a glimpse of what it’s like to be a crossdresser. 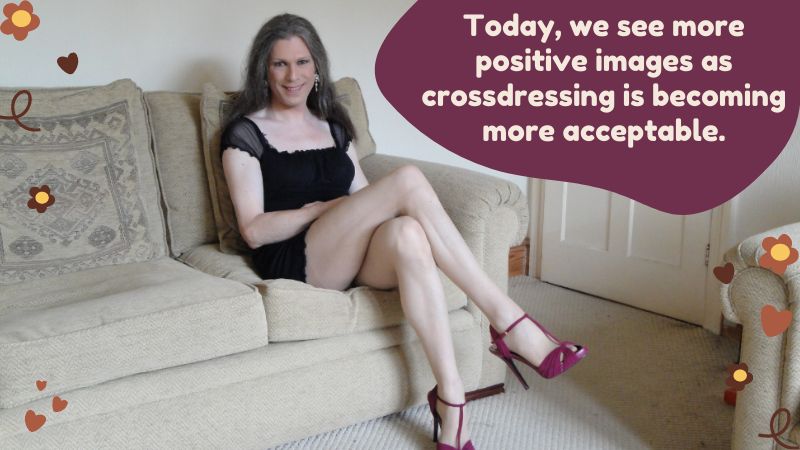 The media has a lot of power when it comes to influencing public opinion. In the past, crossdressing was portrayed as a joke on television. Today, we see more positive images as crossdressing is becoming more acceptable. In shows like Glee, Transparent, and sex education, we can see characters open to wearing clothing of the opposite gender. In the show Transparent, we follow Maura’s character (played by Jeffrey Tambor) as he begins to wear his mother’s clothes and crossdresses. We see Maura’s life after he starts to transition and how people react to him. Shows like these need to continue to create more positive representation for a minority group. The media has reduced the social stigma around crossdressing. It has made it acceptable to talk about it. It has encouraged people to embrace their feminine side.

However, even with all of this increased awareness, there are still many misconceptions. These inaccuracies create a hostile environment for us crossdressers who are just trying to live our lives and enjoy the things we love.

Contents
1. The role media plays in one’s lifestyle choices
2. What role does media play in crossdressing?
3. How has the media helped perpetuate the crossdressing community?
4. Who are some of the famous crossdressing personalities on television? 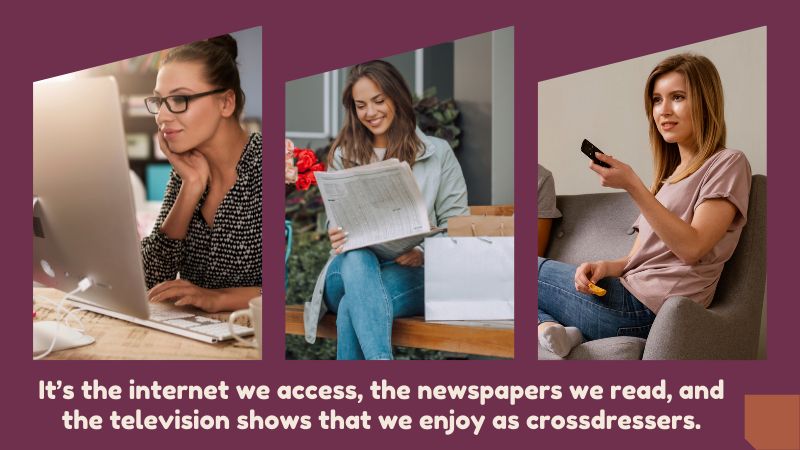 Media is pervasive. It’s in the air we breathe and the TV programs we watch. It’s the internet we access, the newspapers we read, and the television shows that we enjoy as crossdressers. In many ways, the media is everywhere. It’s the websites we access, and even the games we play. The media is a powerful part of our culture. It influences how we dress, how we act, and what we expect of society. The media provides information, entertains, and even educates! 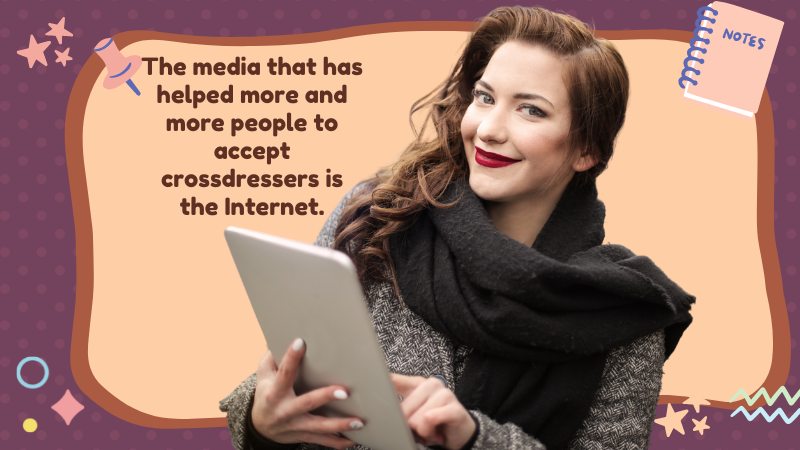 “Media” is short for “mass media”, which refers to forms of communication that deliver information and entertainment to large audiences via mass communication technologies, for example, the press, radio, television, the Internet, and movies. The media forms part of life, and how long we use the media strongly affects their perspectives and views. The media that has helped more and more people to accept crossdressers is the Internet. The internet gives crossdressers a safe space to express themselves and learn valuable information, such as where to buy clothes and accessories as well as how to transition safely.

2. What role does media play in crossdressing? 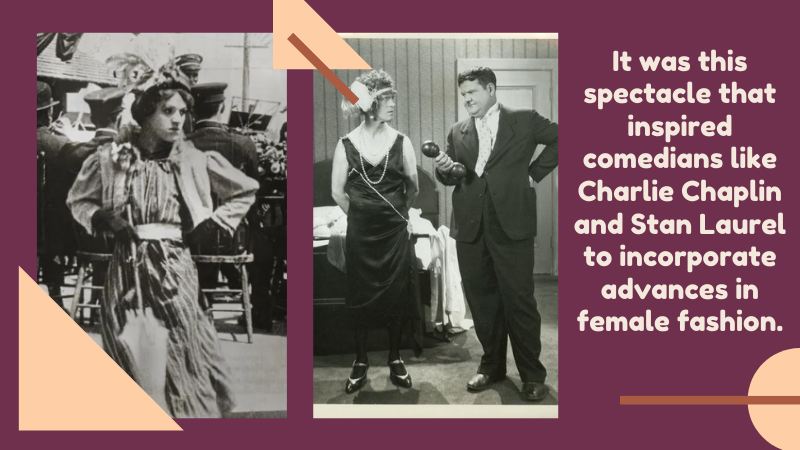 Today, media has had a major impact on how people view crossdressing. Before the Internet, there were very few resources for crossdressers to find information about their lifestyle. Today, the world has changed, and the Internet has given people access to a world of knowledge about crossdressing, even if they’re totally new to it.  It’s a fact that there are people all over the world who are into crossdressing.

While it’s not a common topic, it is interesting to hear that even celebrities and others in the media occasionally crossdress. The media helps promote the idea that crossdressing is normal because it may be confusing to someone who isn’t familiar with it.  For example, crossdressing was portrayed in one of the first silent films in America. This showed a tradition of female impersonation from the English Music Halls, which ultimately made its way to Hollywood. It was this spectacle that inspired comedians like Charlie Chaplin and Stan Laurel to incorporate advances in female fashion into their onscreen personas throughout their films occasionally.

3. How has the media helped perpetuate the crossdressing community? 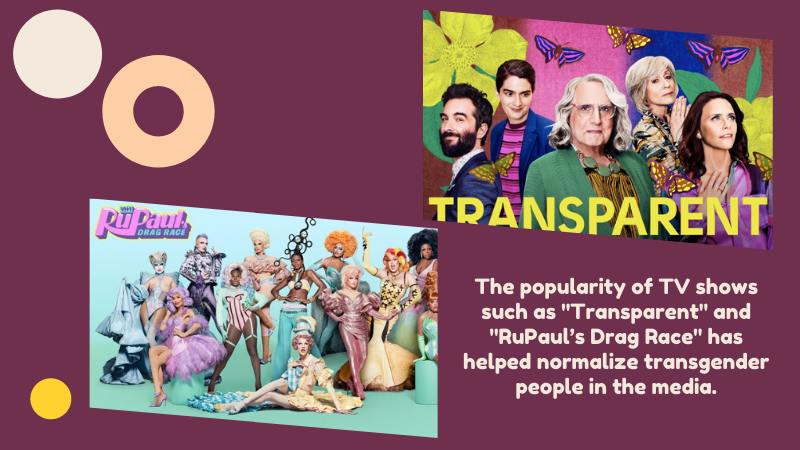 The media has helped the crossdressing community a lot. It helps bring more awareness to the community, and it helps people understand that it is a real thing and not something to be afraid of. The media is a powerful tool, and this is evident with the growing number of LGBTQ+ community. The popularity of TV shows such as “Transparent” and “RuPaul’s Drag Race” has helped normalize transgender people in the media. 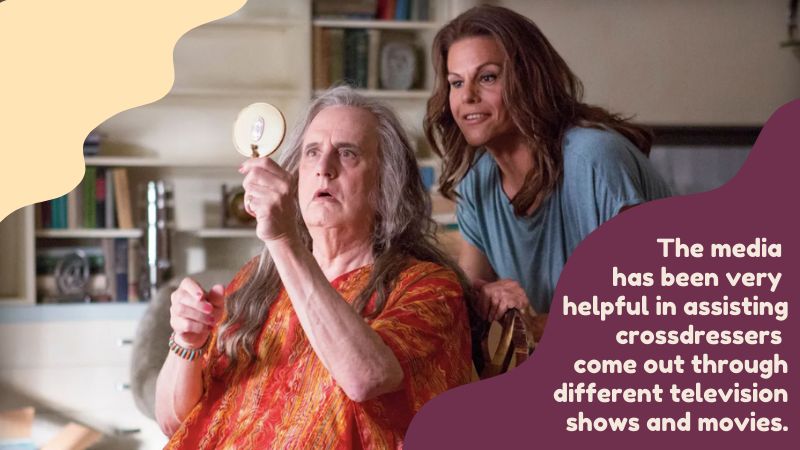 Media has been an excellent place for the crossdressing community to develop and spread throughout the world. By being able to see representations of other people like ourselves, we’re able to validate our feelings and know we’re not alone in this journey. From crossdressing in movies and television shows, to crossdressers writing their own blogs, media has helped people come together to validate each other’s feelings and helped the crossdressing community become louder and more visible than before. The media has been very helpful in assisting crossdressers come out through different television shows and movies. The most popular of these is the program Drag Race, where drag queens are judged on their intellect and ability to be entertaining. While drag queens have been on television for a long time, the introduction of this new program has opened up the minds of many and helped make the community less taboo.

4. Who are some of the famous crossdressing personalities on television? 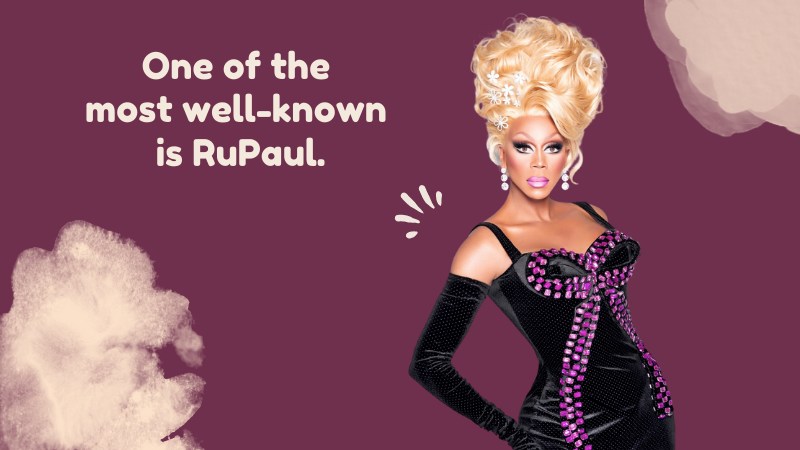 There are a lot of famous crossdressers on television. One of the most well-known is RuPaul. Not only is he, she beautiful, but he, she is also a wonderful teacher for the LGBT community and for anyone who feels like they don’t fit in with their peers. He, she also helped pioneer the concept of drag, which allows people of all sexualities and genders to explore the boundaries of the gender spectrum and come to a place where they feel the most in touch with themselves. The most important thing about crossdressers is that they’re comfortable with who they are and what they’re doing. RuPaul has always made it clear that it’s important to be true to who you are and never to let anyone else make you feel bad about how you look or how you’re different. 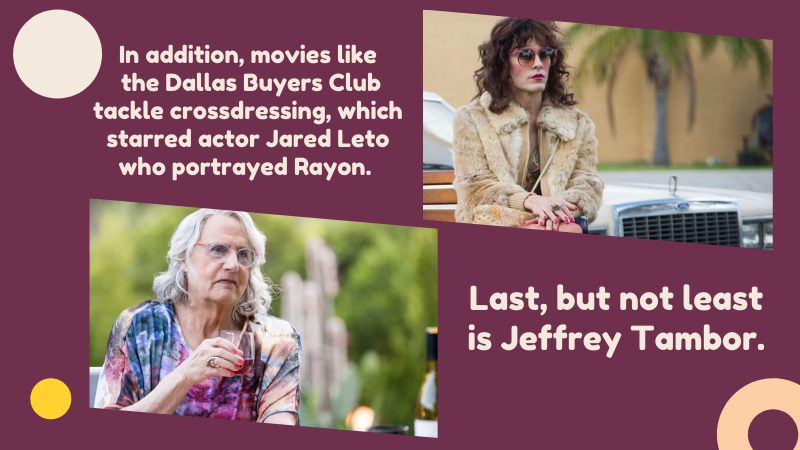 In addition, movies like the Dallas Buyers Club tackle crossdressing, which starred actor Jared Leto who portrayed Rayon, a crossdresser who suffers from HIV. Jared won best supporting actor in the Golden Globes back in 2014 because of this. Another is Alan Cummings who appeared on the show, Girls. Cummings is best known for playing the role of a gay character named Elijah. Last, but not least is Jeffrey Tambor. Tambor has won two awards for the show Transparent. He played the part of Maura Pfefferman, who was transgender. Movies and tv shows alike definitely boost our confidence in being seen and heard by the greater masses.

Whether we like it or not, the media has played a large part in defining the terms associated with crossdressing. Although crossdressing was portrayed in a negative light in the past, society has evolved. The acceptance and tolerance for non-conforming individuals has as well. However, it is still an ongoing battle. Therefore, it’s an important matter to reflect upon as a society. Basically everyone has the right to express themselves in whatever way they choose. When everyone is accepted for exactly who they are, the world might just be a happier place!