What Is the Difference Between Crossdressers and Transgender

As time goes by, we can notice a big improvement in LGBTQIA+ represention. It brings us many benefits, such as the increase in acceptance rate for a variety of gender identity. However, sometimes people get confused, as a result of misinformation or lack of understanding. A common mistake is to assume that crossdressers and transgender people are the same. Well, they are not, and in this article, you shall learn the differences between them. 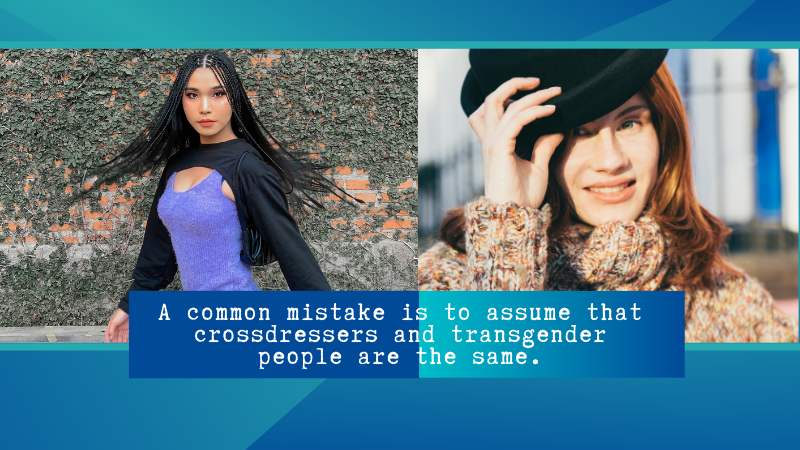 You’ll see that crossdressing is more of an activity than proper gender identity. Trans people feel that they belong to a gender that is not the one assigned to them at birth, while this may not be the case for most crossdressers. These are two separate things, you don’t have to be one to identify as the other, but it doesn’t mean you can’t be both.

To learn more about the aspects of each category, I’ll give you some examples and explain few things about gender identity. By the end, I hope you’ll be able to tell the difference between crossdressers and transgenders. And after that, you may decide which term fits your situation.

What Is the Difference Between Crossdressers and Transgender hide
1. A brief introduction to a few terms
2. What is a transgender person?
3. What’s a crossdresser?
4. Motivations of each one
5. Impact on life
6. Historical context
7. Methods 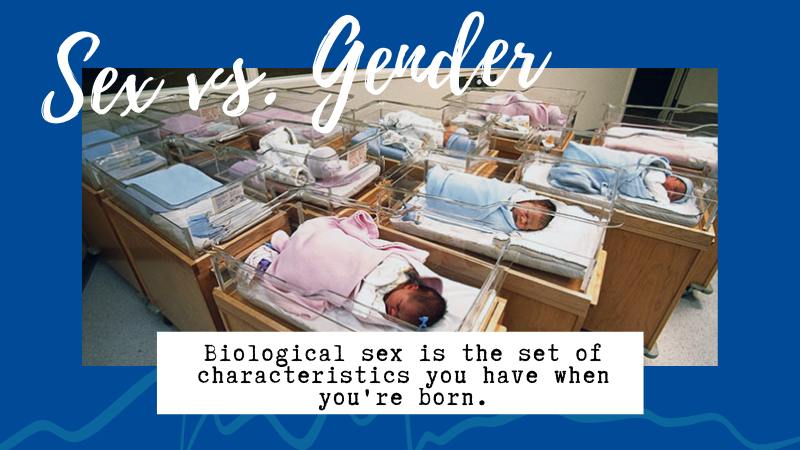 Once a person is born, their parents or the doctors tend to assign them to a gender, based on their biological sex. Biological sex is the set of characteristics you have when you’re born, such as chromosomes, hormones and genitals. 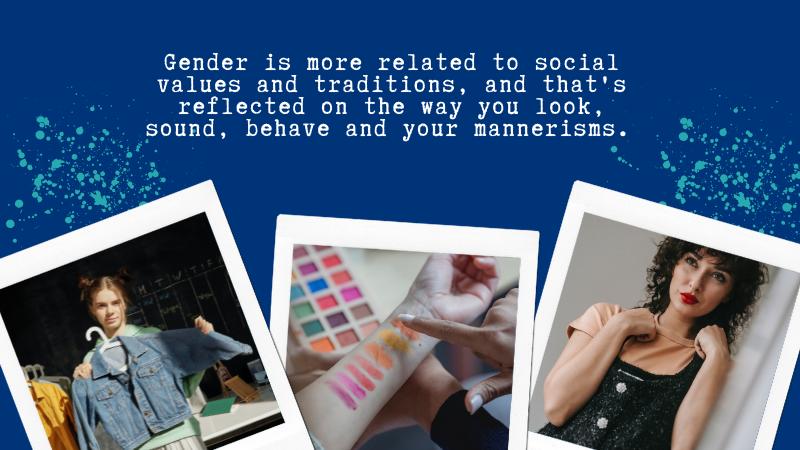 Gender, on the other hand, has a different meanings. It’s more related to social values and traditions, and that’s reflected on the way you look, sound, behave, and your mannerisms. Such reflections are referred to as gender expression. Your gender identity is defined by how related you feel to each gender. Each person has a biological sex, a gender identity and one or multiple gender expressions.

2. What is a transgender person?

A transgender person is someone that identify as being from a different gender than the one they were assigned to at birth. They can be classified as binary and non-binary, depending on how they identify. 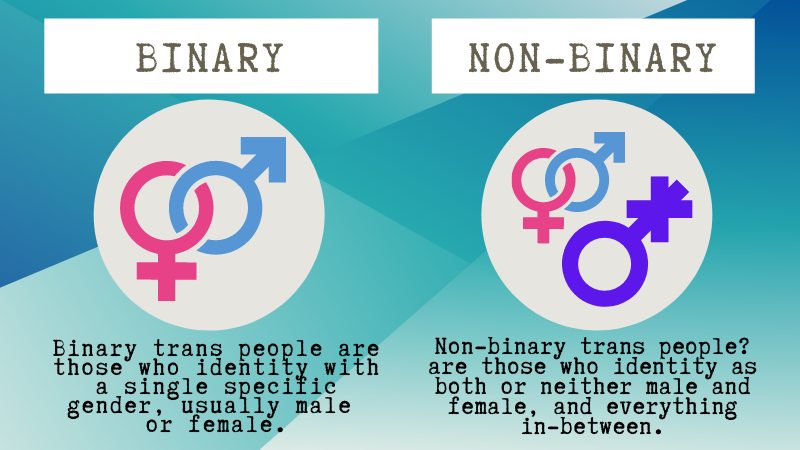 Binary trans people are those who identity with a single specific gender, usually male or female. I say that because the definitions of male and female may be different between societies. And social context plays a major role in defining  gender role. Now what about non binary trans people? Well, they’re those who identity as both or neither male and female, and everything in-between. This category includes genderfluid people as well, as their gender identity flows between a variety of genders. 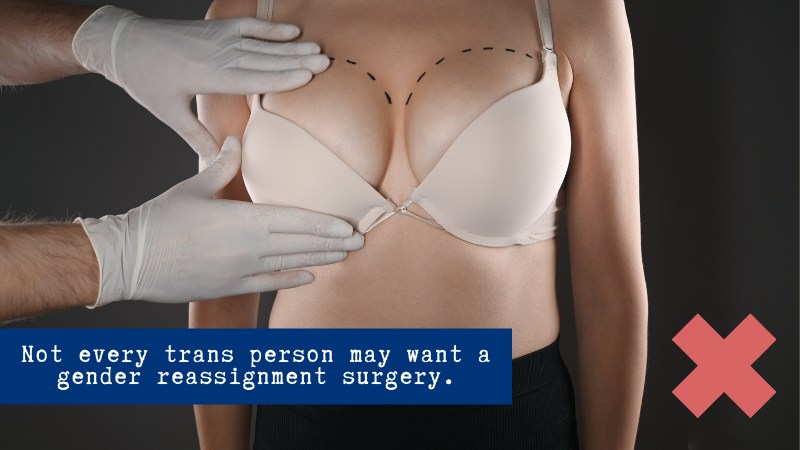 Another thing to add is that not every trans person may want a gender reassignment surgery, or do an Hormone replacement therapy. That’s because each one of us experiences gender in our own way, and not everyone feels body dysphoria. Gender transitioning aims to make trans people happy and comfortable with their own body. Therefore, if a trans person is already comfortable with their body, there’s no need for them to undergo any of these procedures. Another quick note, is that the term “transexual” is often used to describe people that transitioned. But you should ask the which term they are comfortable with. 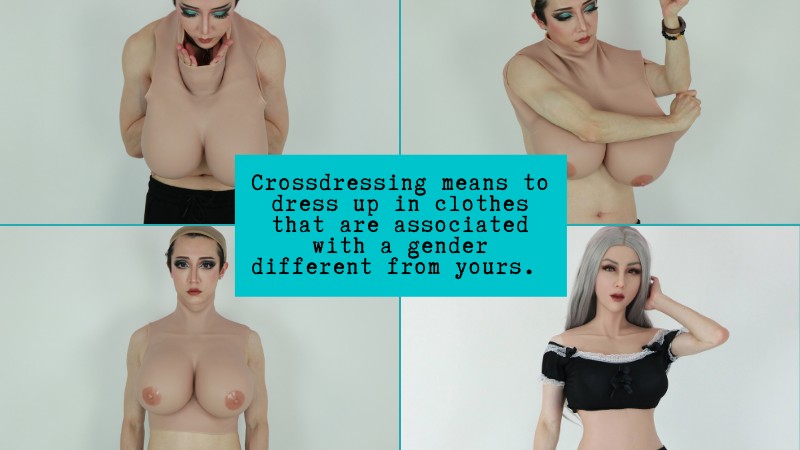 Crossdressing is an activity rather than a gender identity. It means to dress up in clothes that are associated with a gender different from yours. For example, when a cisgender man dresses up as a woman. Crossdressers may have different techniques and motivations, but that’s the basics of how it works. You can be a transgender crossdresser, but you don’t have to be trans to crossdress. In more technical words, to crossdress is to change your gender expression. And as we saw before, gender expression and identity are two different things. 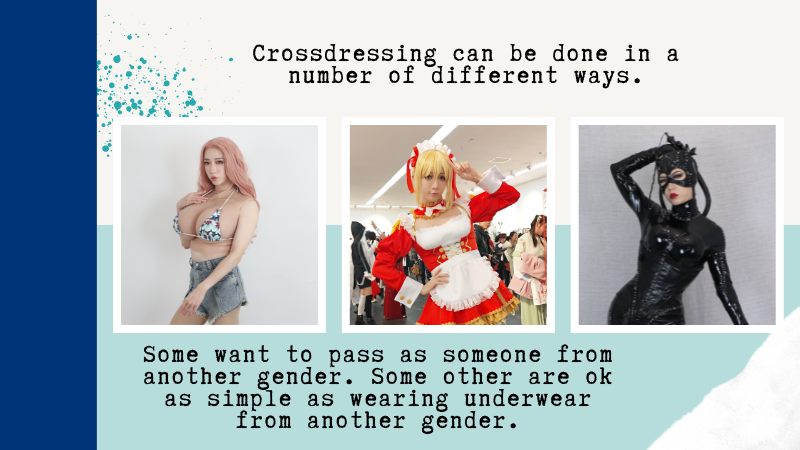 Crossdressing can be done in a number of different ways, depending on your goals. Some people really want to pass as someone from another gender. They tend to put a lot of effort into their makeup, use a wide variety of shape wear and practice both their voice and mannerisms. Some other are ok with stuff as simple as wearing underwear from another gender. This diversity is what makes crossdressing so versatile and special.

4. Motivations of each one 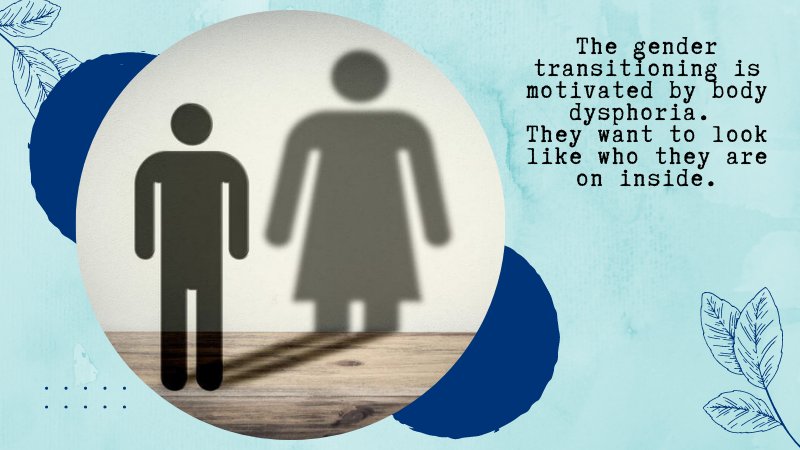 Transgender people are motivated by the desire of being their true selfs. All they want is to be perceived as who they really are, instead of someone they were told they should be. The gender transitioning is motivated by this desire, and by body dysphoria, which is a common issue among them. The goal is to match their gender expression their identity. To simplify things, we can say that they want to look like who they are on inside. 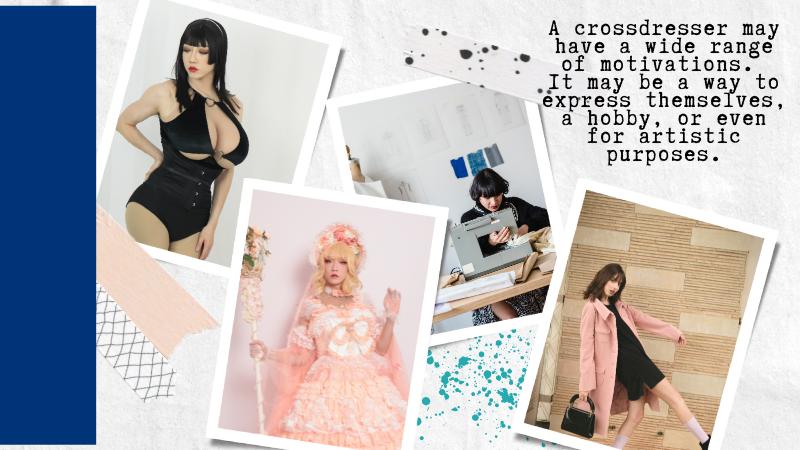 A crossdresser, on the other hand, may have a wide range of motivations. Sometimes, it may be nothing more than a different experience. Sometimes it’s a matter of fashion, culture or even experimentation. Or even, it may be a way to express themselves, a hobby or even for artistic purposes. Crossdressing isn’t bond to gender stereotypes, so anyone can do it. Dressing as a woman won’t make a man less masculine on the inside, it’s a matter of presentation. In other words, your gender expression isn’t bond to your gender identity. They are both social constructs and can’t hold you back from being yourself or doing what you like.

Being a crossdresser is something you can keep as a secret. You can dress up at night, and change before you sleep. As long as it satisfies your needs, no one needs to know you’re a crossdresser. What I mean is that you won’t feel less valid if you hold back from crossdressing for a while. But if you’re trans, you may want to come out so people see an treat you as the person you really are. Not coming out as trans may cause transgender people to repress themselves. They may feel like they are playing a role, or pretending to be someone they aren’t. 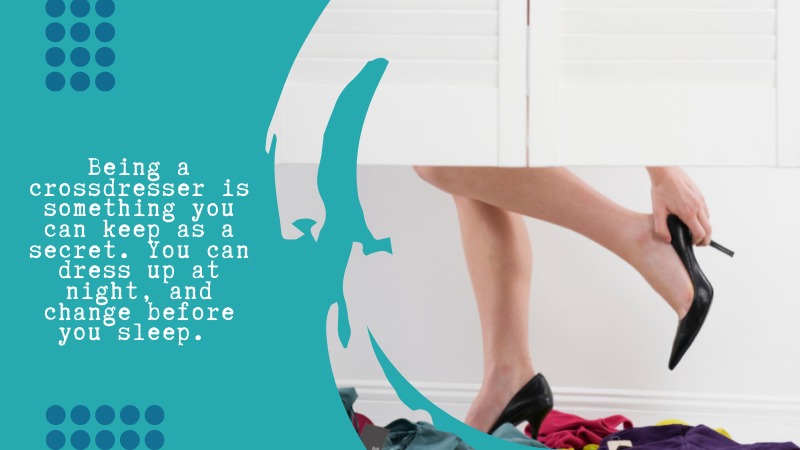 In other terms, crossdressers may be able to hide it without suffering too much, depending on their motivation. Trans people, on the other hand, face a wide range of pressures, making it hard to live as a trans person. But if they happen to  hide it, they won’t be able to be themselves and may become depressed. 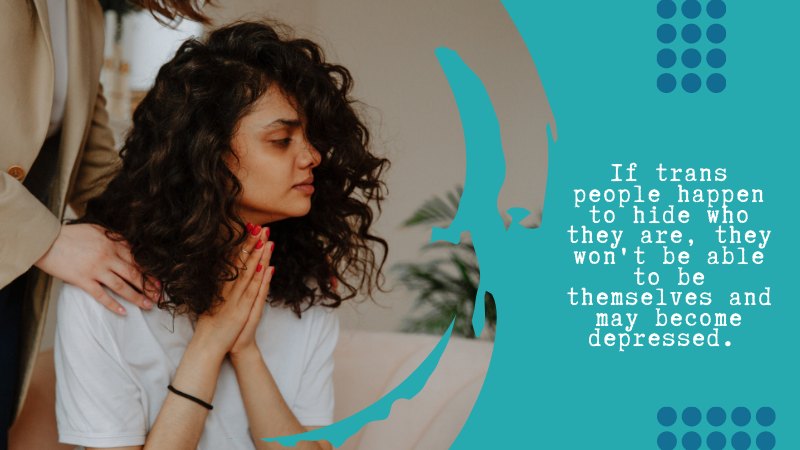 The importance of passability also varies between them. Trans people tend to want it more often, in order to feel validated. While some crossdressers do want to pass, I want to make it clear that it’s not everyone’s priority. 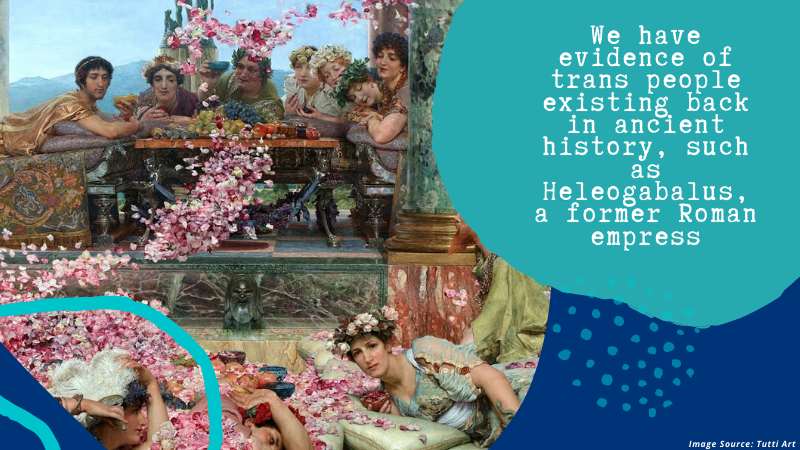 We can assume that both crossdressers and trans people always existed. Well, at least since we came up with the concept of gender. They both are an important part of ancient history, even though they had different receptions through the ages. It was fair common in ancient Greece and Rome to see a male actor playing a female role in their theaters. We have evidence of trans people existing back then as well, such as Heleogabalus, a former Roman empress.

The main difference between them is how society viewed them at their time. Crossdressers tended to be more accepted, but were usually treated as a comic relief or related to art. Trans people had less visibility, and we’re more likely to be victims of prejudice. However, it didn’t stop them from existing or fighting for their right to do so.

Some methods used by trans people are the same that crossdressers use. However some of the are vastly different. To a certain degree, we can say that transgenders tend to use every techniques that crossdressers use, but with a few extra steps. A good example is makeup and shape wear, which both of them tend to use. The goal of makeup is to make their face look more feminine or masculine, while shape wear changes their silhouette. While these are the main techniques for a crossdresser, trans people use them as a complement to HRT. They do so because HRT takes a few years to make any big changes in their appearance. While they wait, they make use of temporary techniques. Many of which are the same used by crossdressers for short periods of time. Another interesting fact is that trans people may keep using these techniques. Even after completing their transition. They do so in order to boost their passability. 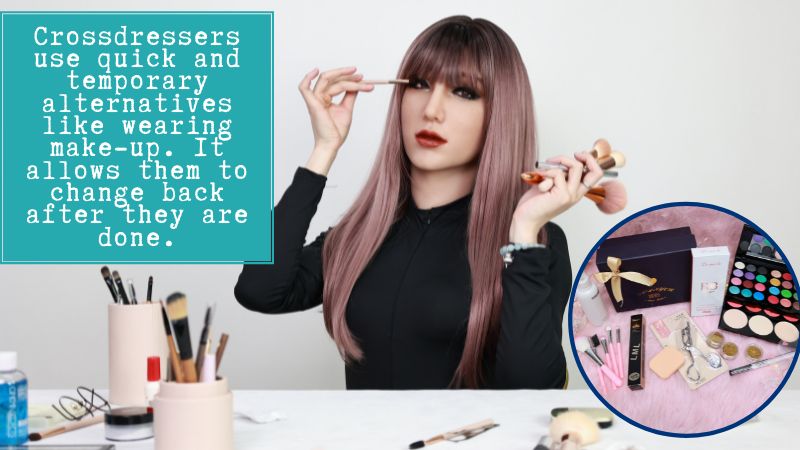 In short terms, they both have the same goal of achieving a certain look. The difference is that crossdressers use quick and temporary alternatives. It allows them to change back after they are done. Trans people, on the other hand, search for permanent solutions, even though they take longer to have the desired effect. 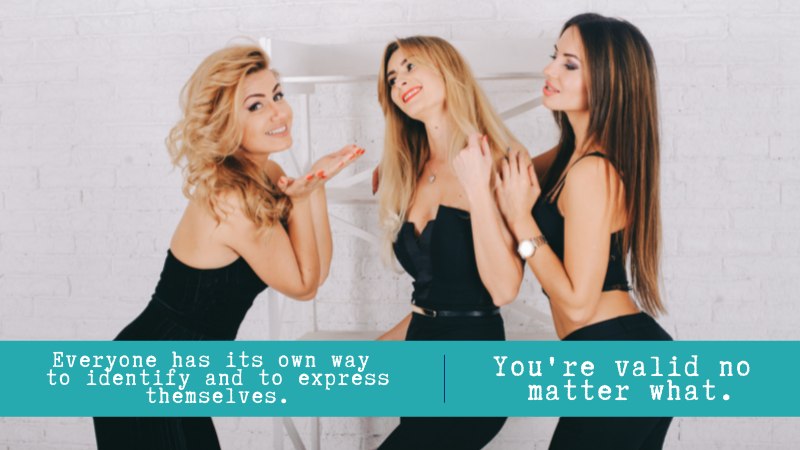 Even though crossdressers and trans people do share some similarities, they are not the same. Everyone has its own way to identify and to express themselves, and should have the right to do so. I hope that you can now decide upon which definition suits you better. But feel free to use both or even none of them. Your identity is up only to you, and you’re valid no matter what.