8 Most Common Myths Regarding Crossdressers

In essence, crossdressing is a type of gender expression—men can wear female clothes or the opposite. However, when men do that, they’re faced with much criticism from societies that label them as kinky, perverts, sexually deviant, etc. There are innumerable assumptions about them, some of which have had severe consequences, including discrimination and even divorce! 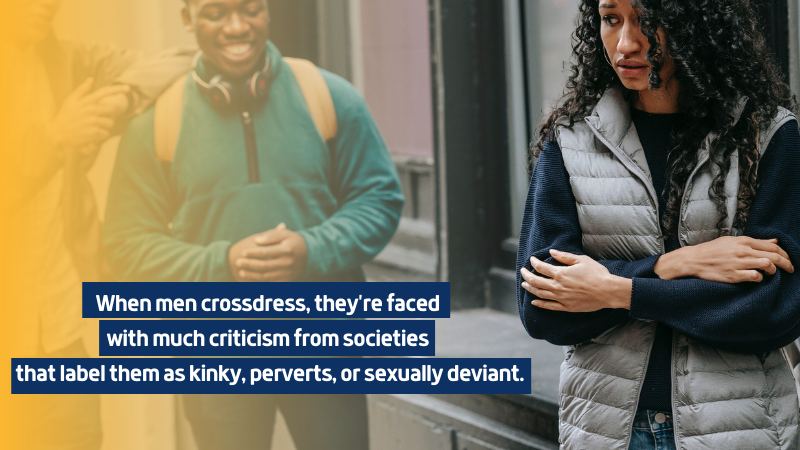 Here’s why I’m going to debunk 10 of these assumptions to keep you informed. Information is key! By reading below, you’ll gain a deeper understanding of who and what we are.

1. No matter what they wear, crossdressers behave like women.

Because many of us crossdressers are afraid of being discovered, we try to act as conventionally masculine as possible. As you’ll read below, we are not trying to be women, and neither are we gay—at least for most of us. 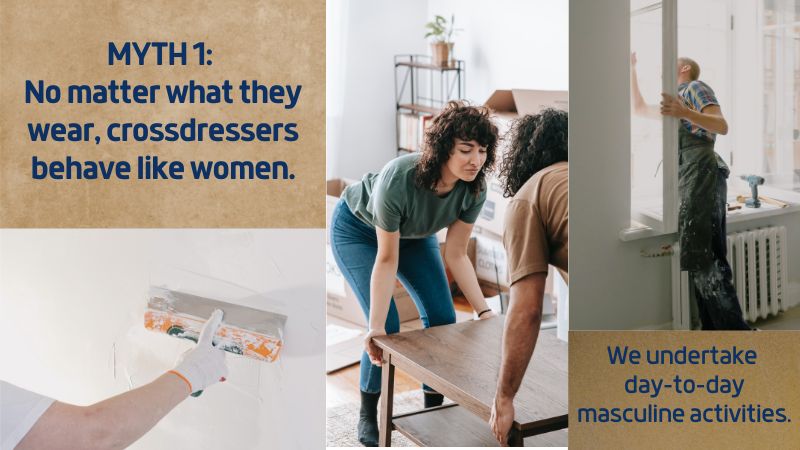 We undertake day-to-day masculine activities – being husbands, dads, football coaches, coworkers, and so on. So, to cut the story short, we don’t act like women in masculine or everyday contexts.

However, when the opportunity to crossdress presents itself, we often embrace our feminine side. And so, don’t get shocked the next time you meet with your plumber or electrician dressed in red heels or dancing in a dress!

Apart from blogging, I enjoy surfing, weight lifting, and training. Meet me at the beach and you wouldn’t tell whether I’m the pretty boy you met at a concert.

2. They are looking for a sex change.

I’m sorry, but that’s not true. The overwhelming majority of us are heterosexual guys, as stated in the previous paragraph. Only a tiny percentage of CDs are gender nonconformists.

We all have a strong desire to learn more about our feminine side, yet few of us want to undergo surgery to become transgender (MtF). 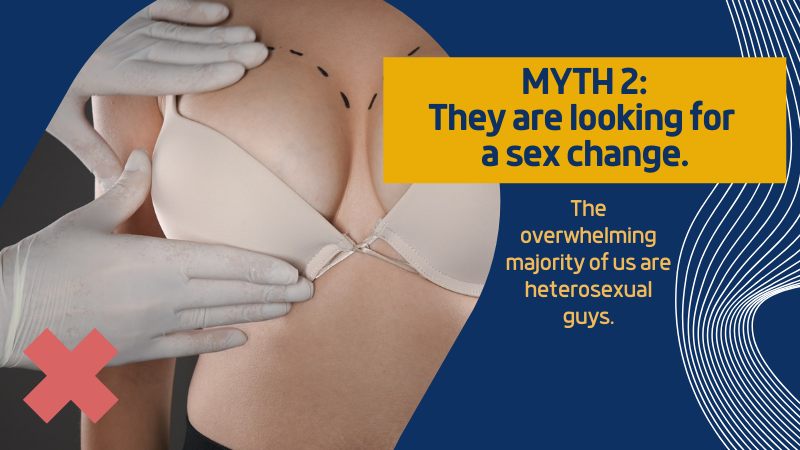 I’m not sure whether this explains anything, but I’ve discovered a previously hidden side of myself that I feel compelled to explore and accept. Yes, I love female apparels and entertaining my female side. However, I’m able to play the role of a male when necessary. If anything, this is a win-win situation for me, but I have no desire to become a woman.

I’m sure you’ve come across the term tomboy—a woman who acts like a boy. If you know one, ask them how it feels to dress or act like a boy, from time to time. The answer will definitely be “it feels awesome”.

And that’s exactly what happens to us. It feels good. But we’re not trying to have sex changes.

3. Crossdressing is classified as a mental disorder.

Society’s criticism of their behavior causes anxiety for some of us, and this anxiety can lead to depression and other mental health issues. These symptoms often go away or never appear in a welcoming or tolerant atmosphere.

Contrary to common misconception, the DSM-IV does not classify crossdressing as a mental disease. 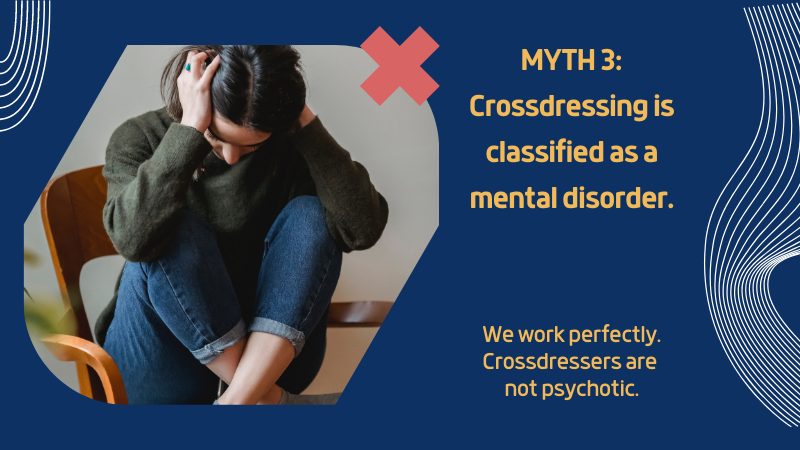 When referring to mental disorders, the DSM notes in its introduction neither deviancy, nor conflicts that are essentially between a society and the individual are not mental disorders. And so, the fact that we don’t conform to society’s expected standards doesn’t mean that we are mentally ill; we just don’t want to fit.

You should note that mental dysfunction refers to a person’s incapacity to function on a day-to-day basis. We work perfectly—as previously mentioned, even in menial assignments.

And therefore, the majority of crossdressers are not psychotic.

4. All crossdressers are gay.

This is one of the most common misconceptions about us and the most frequently asked question. The answer is a resounding no. We are not all gay. In reality, based on my observations, it’s a rare occurrence.

A person who dresses as a woman may do so because they want to feel more feminine or enjoy the feel of women’s clothing on their skin. That does not equate to being homosexual. 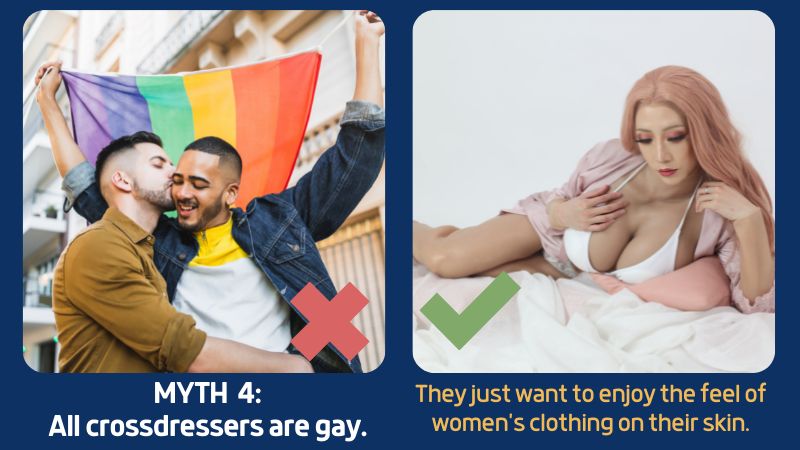 I believe in a world where there’s freedom of choice, everyone has the right to choose; and this includes clothing. So what if you want to apply on some makeup, wear a wig, and put on some heels. Does that imply that you like other men or you’re trying to become a woman? 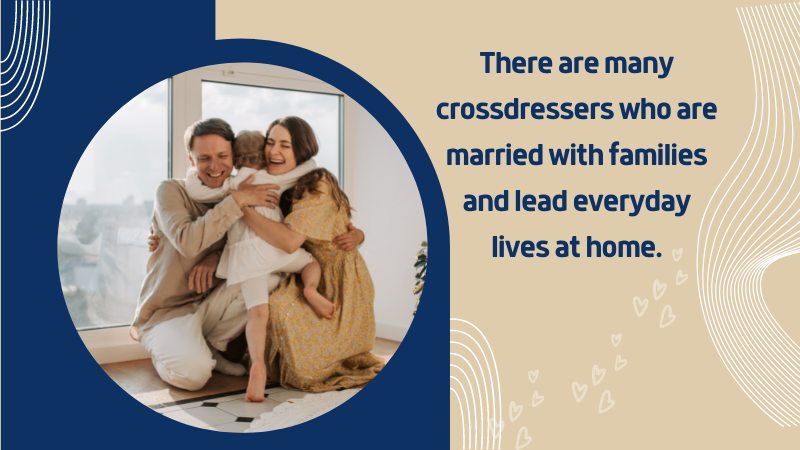 Don’t get it wrong. Remember this, while some gays crossdress, not all of us are gay. I have many crossdresser friends who are married with families and lead everyday lives at home.

Although I haven’t tied the knot yet, I look forward to marrying a woman—yes, my willy is still intact and functional.

5. Crossdressing and being transgender are the same thing.

It’s one of the most popular assumptions in the general public. Still, it’s false and erroneous.

In general, transgender persons have a gender expression or identity that contrasts with their sex at birth. In contrast, crossdressers are comfortable with their current sex, although they want to express their feminine sides through clothing, etc. 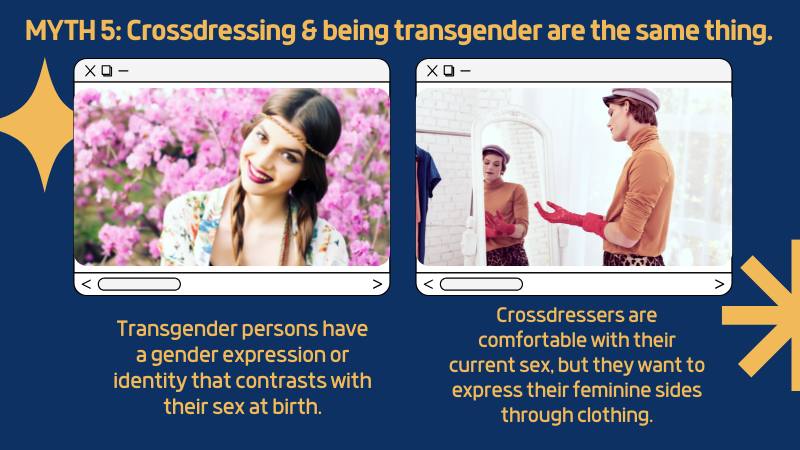 Also, gender dysphoria is common among trans people, and medical interventions such as hormone replacement, gender reassignment surgeries, or psychotherapy may alleviate the symptoms.

Some of them don’t want or can’t have these procedures done for various reasons, including personal preference or budgetary constraints. 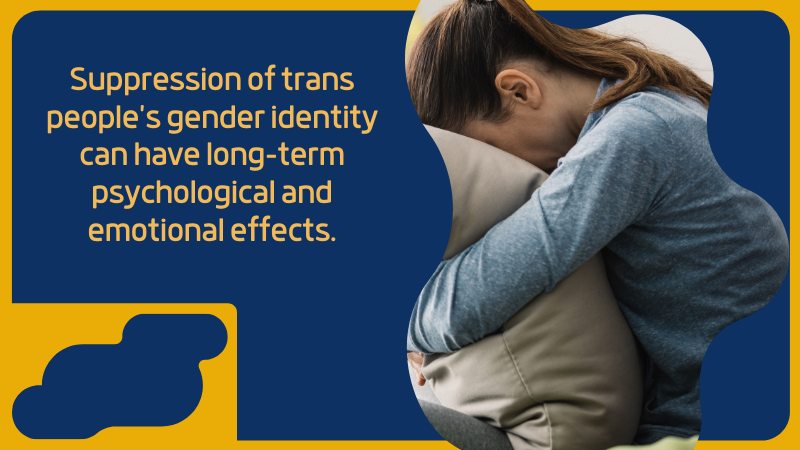 For them, the sex they were given at birth doesn’t feel right; therefore, they choose to live out their lives as either a man or a woman. Suppression of trans people’s gender identity can have long-term psychological and emotional effects.

6. They are not good husbands and fathers.

Some people consider crossdressing men as a threat to their families. But that’s far from the truth.

In general, we judge men—whether they’re good fathers and husbands or not—based on how they treat their wives and children. As long as an individual plays their role well, they’re good! 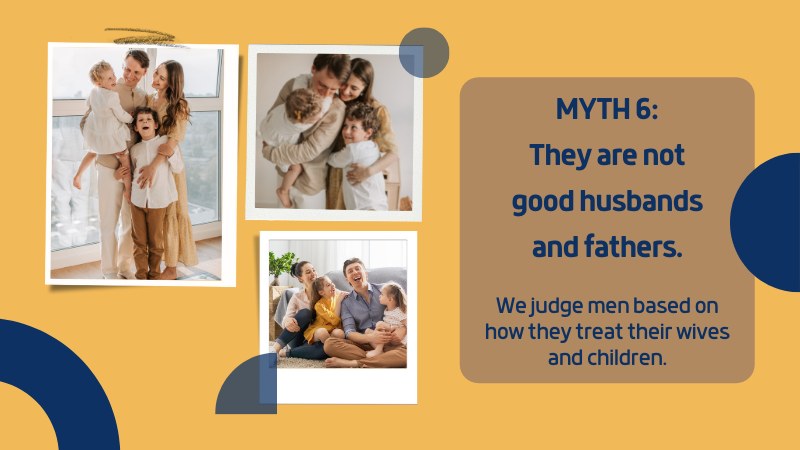 I must mention that I had the best crossdresser dad. At first, he started with putting on my mom’s apron while cooking, to her slippers then her heels. It was a bit entertaining for us, as kids, although my mum hated it. I remember her lashing out one day, “Stan, just make sure you’ve changed before the guests start arriving”. 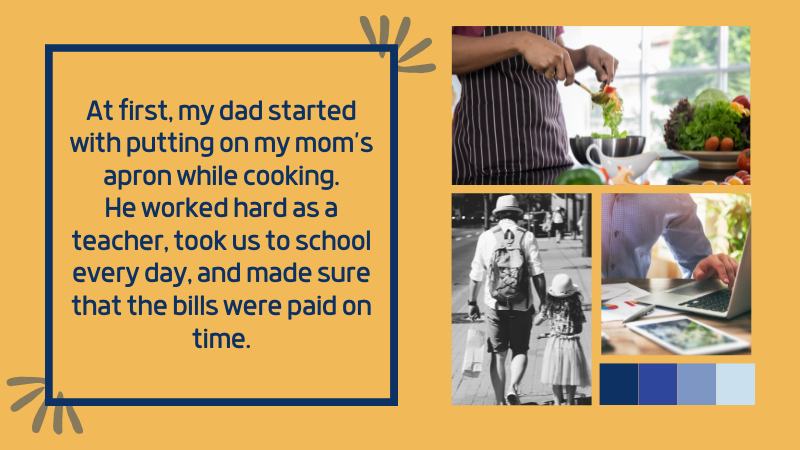 It gradually became a non-issue. I’m sure that my mom chose to snub it because he was a good dad. He worked hard as a teacher, took us to school every day, made sure that the bills were paid on time, etc. Also, may parents are still together after 30+ years of marriage—that speaks volume on the type of husband he is, and their relationship dynamics.

Being a crossdresser, I plan to give the best to my kids—both time and resources. So, don’t judge us based on our look, but character.

7. Crossdressing is only for feminine body types.

Contrary to popular opinion, crossdressing is for all types of bodies. So, whether you are lean or fat, tall or short, etc., you can crossdress. 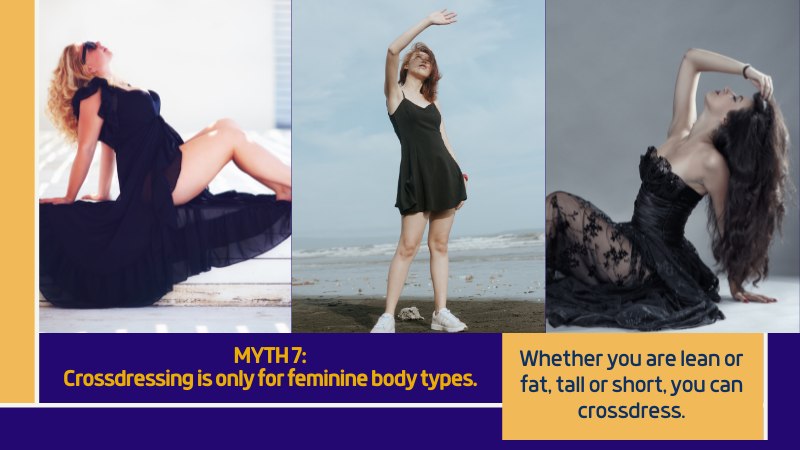 One thing to note is that it should be fun. So don’t put too much pressure on yourself. However, if you’ve been reading our blogs, you might have bumped into different articles about feminization—what you can do to look more feminine and stuff. My goal is to help increase your confidence so that you can comfortably step out in public. 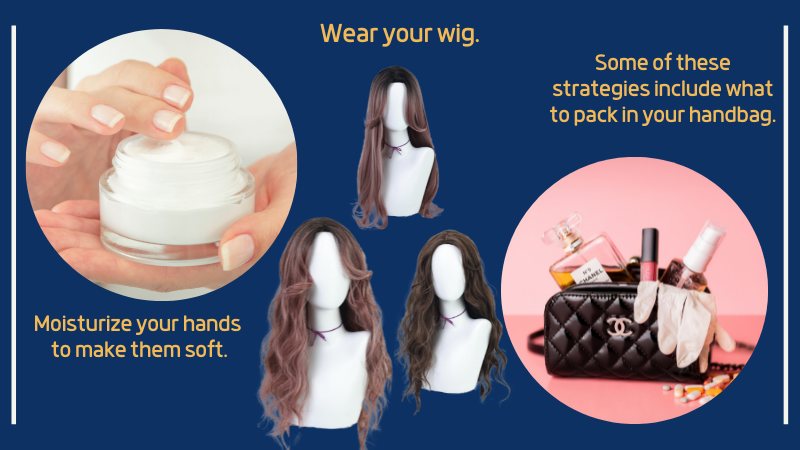 It doesn’t hurt to look more feminine or to embrace your femininity fully. If that’s your goal, be sure to implement the recommended strategies. Some of these strategies include moisturizing your hands to make them soft, wearing your wig, and also what to pack in your handbag. My most favorite so far is moisturizing my hands. Darlings, they’re as soft as a baby’s bum!

Still, if you want to crossdress as you are, don’t be shy; it’s your body, have fun with it! Whether is wearing tight jeans or a sexy pair of heels, do your thing; and make sure to add some sass to it.

8. People become crossdressers because of being dressed as girls in their childhood.

It’s important to note that some crossdressers claim to have had their first crossdressing encounters as children. Several of these encounters took place because of their early fantasies about gender roles being played out. Some of these events were instigated as punishment by parents or guardians. 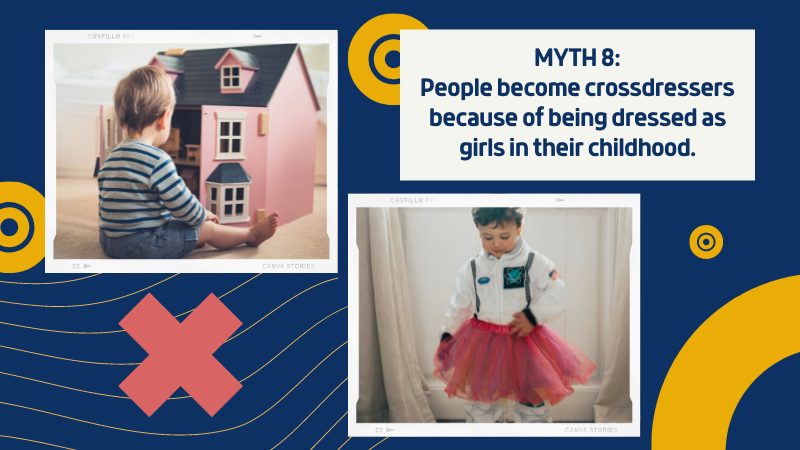 Nevertheless, a particular study proved otherwise. As part of a study conducted by Dr. Richard Green of UCLA, an MD, he tracked a sample of sissy males from childhood through their early adulthoods. In their younger years, several of them dressed as females. 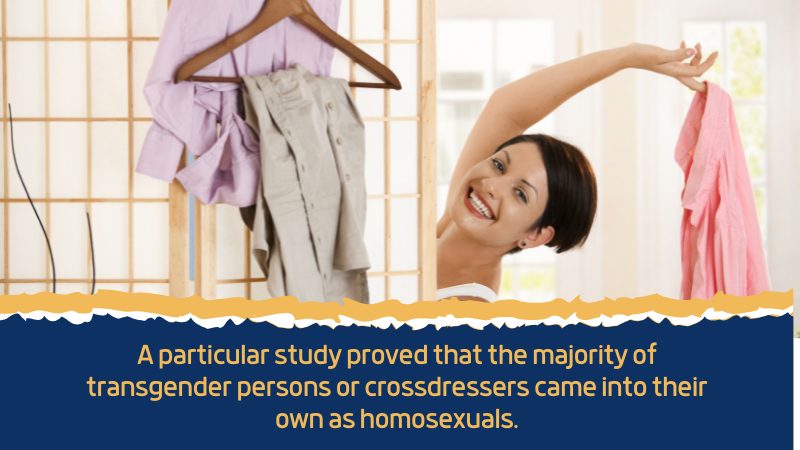 However, no one became a crossdresser or a transgender person, and only a few did. The majority of them came into their own as homosexuals. As far as I can tell, people don’t become start crossdressing because they were dressed during their childhood.

There you have it! As you’ve seen, most of us are men trying on women’s apparel; basically, all women clothes and products we can get our hands-on. We are not gays, kinky, perverts, and all the above; we’re are just the guy next door looking to explore our feminine sides. Have you learned something new? Feel free to share with others and keep them informed too! 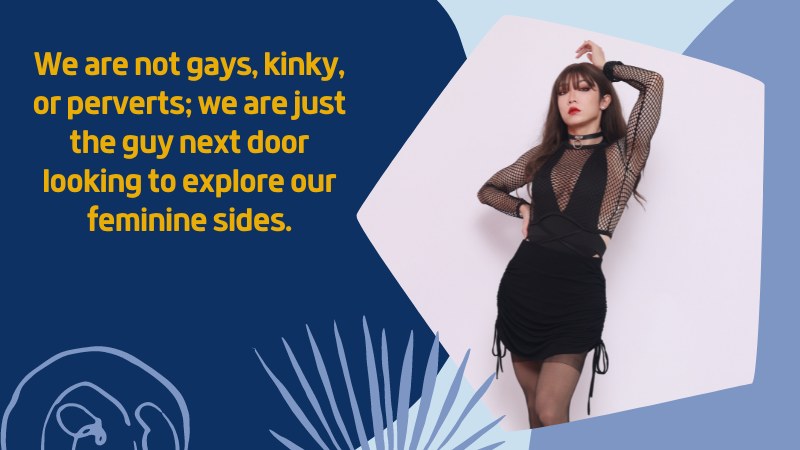