Drag Performance Is a Gateway to Femininity

Drag is a performance art that combines elements of theater, fashion, and comedy. In drag, artists take on the persona of a different gender than they were assigned at birth. Drag can be done by men or women, but it’s usually performed by men. Men who do drag are called “drag queens” while women are called “drag kings”. This art form encourages gender expression that does not conform to normative ideas about what behavior is appropriate for men and women. 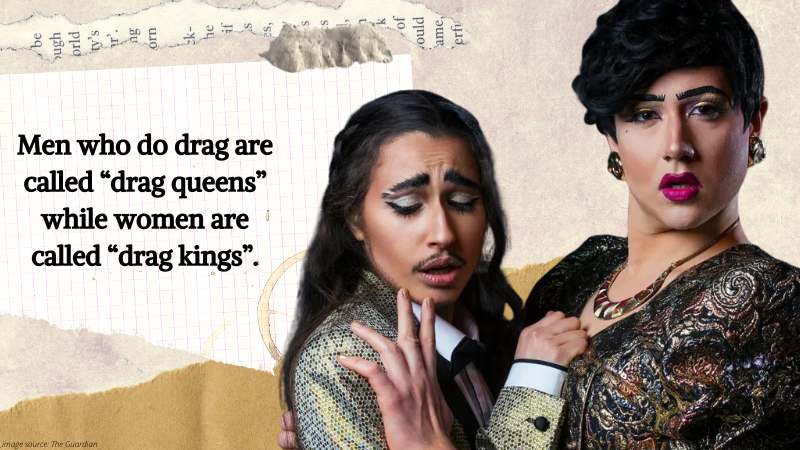 There is great importance in drag performance in relation to femininity. A drag performer is in fact a parodist of gender, not a mere imitator. These performances can be seen as a way for people to step outside their expected roles or behaviors, creating space for an exploration of one’s own identity. Drag performers are a gateway to femininity. Drag encourages gender expression that does not conform to normative ideas about what behavior is appropriate for men and women. Immersion into drag culture allows individuals who may otherwise feel like they cannot express themselves due to social expectations or norms, to explore their identities in ways that may not have been possible otherwise.

Drag performance (MtF) is about challenging norms of masculinity, and gender expression—and it can be especially powerful for those who have been told that their gender does not match their assigned sex at birth. Drag isn’t just about wearing a dress and putting on some lipstick. It’s about feeling comfortable in your own skin, no matter who you are or what you do. It’s also a safe space where people can explore their identities without fear of judgment or ridicule.

Contents
1. Who are drag queens?
2. The power of femininity
3. A gateway to femininity
4. Expression of femininity and masculinity
5. Helps with gender nonconformity
6. Perpetuates cultural and social understandings. 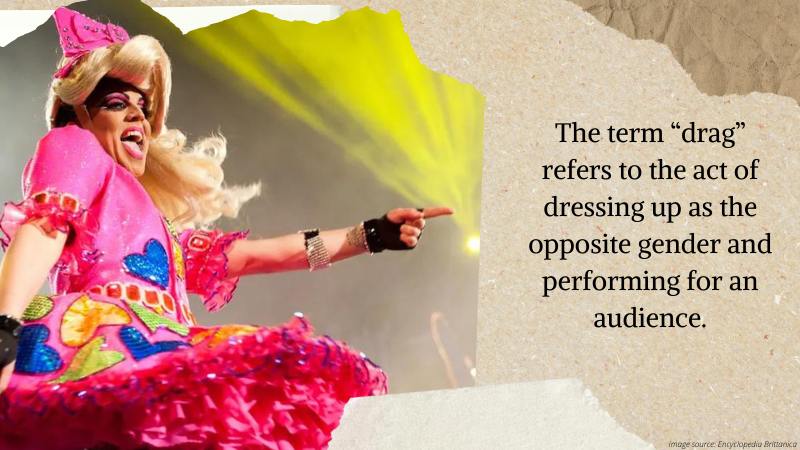 Drag queens are male-identified performers who dress in feminine clothing and makeup. Their female counterparts are called drag kings. They often lip-sync to music and dance, but they can also sing live or tell jokes. The term “drag” refers to the act of dressing up as the opposite gender and performing for an audience. Drag queens have become increasingly popular in recent years due to platforms like RuPaul’s Drag Race, which showcases the talents of drag queens across America and around the world. 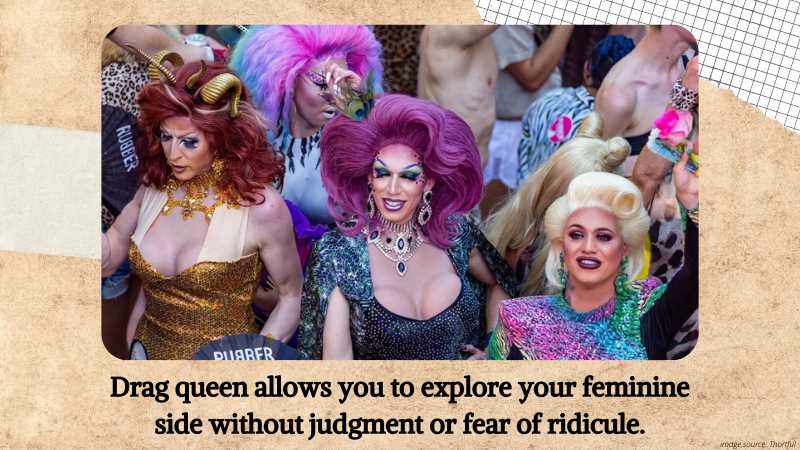 Drag queens usually perform at bars, clubs, and gay pride events. Some drag queens are gay men; others are straight men who like to dress up as women for fun. Drag queens can help people realize their true selves, as well as help them accept their true self. Many of us have been conditioned to believe that we should act a certain way based on what society expects of us, even if those expectations don’t match with who we truly are. This can lead to internal conflict which can be hard to resolve. Drag queen allows you to explore your feminine side without judgment or fear of ridicule. This allows you to embrace your own inner femininity and eventually embrace it in your everyday life.

2. The power of femininity 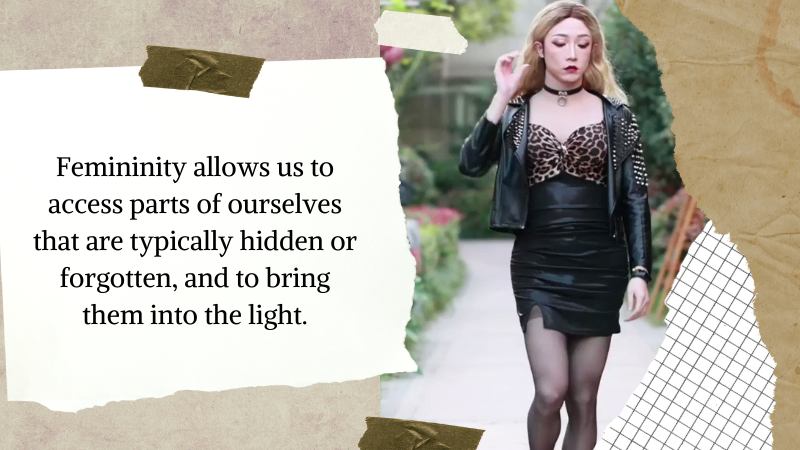 Femininity is used to access a unique understanding of the self. We all have our own strengths, but they can be difficult to access when we’re not in our most authentic state. Femininity allows us to access parts of ourselves that are typically hidden or forgotten, and to bring them into the light. It can be used as an act of rebellion, or an act of self-love. It’s not just about what you look like or how you dress—it’s about how you feel when you’re expressing yourself through femininity. This is important for many reasons—it helps us connect with others in more meaningful ways, it helps us trust ourselves, and it allows us to have more fulfilling relationships with those around us. 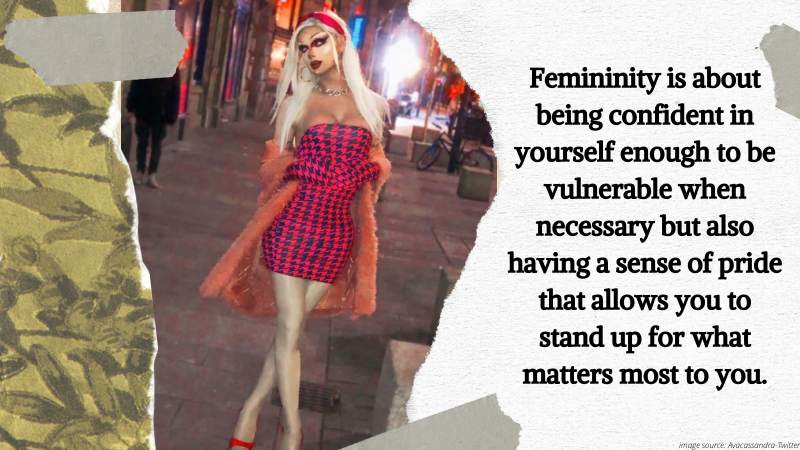 There is great power in achieving femininity. It’s not just about the clothes and the makeup, though those are important. Femininity is also about being comfortable with who you are and what you want out of life. That means being comfortable in your own skin while still striving to be better. It means doing what makes you happy, even if it doesn’t always make other people happy (or even if it’s “wrong” by society’s standards).

Femininity is about being confident in yourself enough to be vulnerable when necessary but also having a sense of pride that allows you to stand up for what matters most to you. And finally, femininity is about owning yourself as a beautiful woman—your body, your mind, and your spirit—and loving all parts of yourself equally. Femininity is not just about women’s empowerment. It is also about gender equality. It’s time to end the toxic stereotypes around femininity, and celebrate freedom of expression.

3. A gateway to femininity 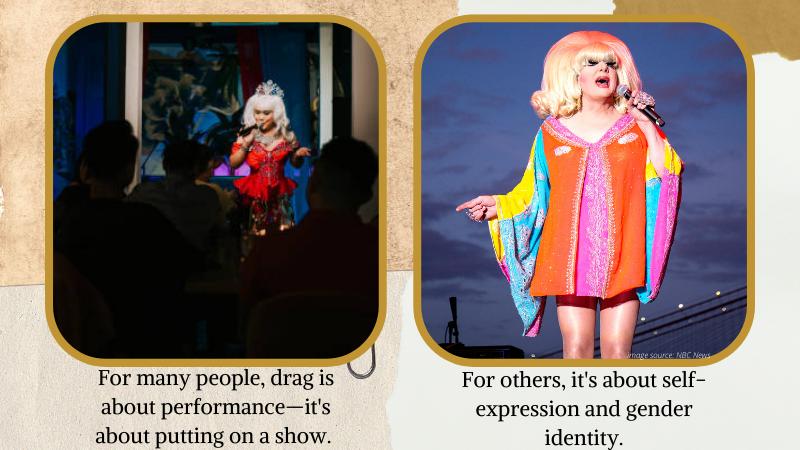 For example, when a man performs in drag as a woman, he may begin to see himself as more feminine than he did before. This experience can be powerful for men who tend to identify as more masculine than feminine. It gives them insight into how women experience the world, an understanding that may help them better relate to women in their lives and work environments. 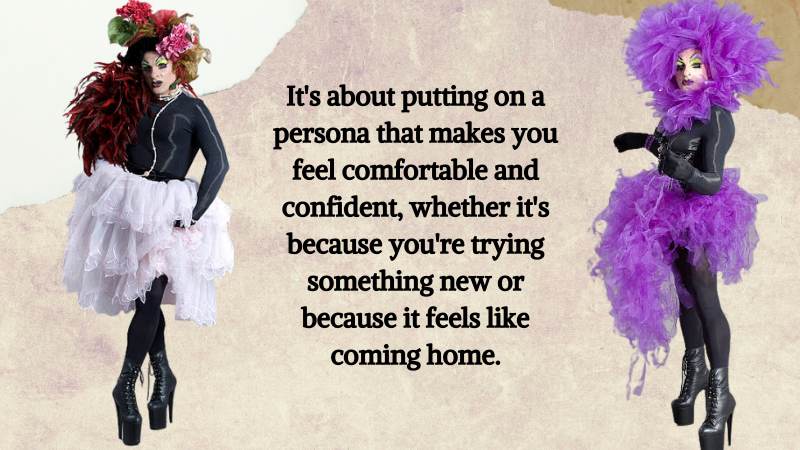 Drag performance allows people to “try on” different identities without having to fully commit or identify with them. In many cultures, it’s a way for men to express their femininity without being judged—it’s also a great way for people who identify as women (cis or trans) to explore and celebrate their femininity.  It gives the opportunity to play with the gender binary, which has often been considered rigid and unchanging.

This is especially true for cisgender men who perform in drag shows. Many find that performing in drag helps them understand themselves better as well as their own masculinity, gender expression, and gender identity. You don’t have to be a woman to be feminine. It’s about putting on a persona that makes you feel comfortable and confident, whether it’s because you’re trying something new or because it feels like coming home.

4. Expression of femininity and masculinity 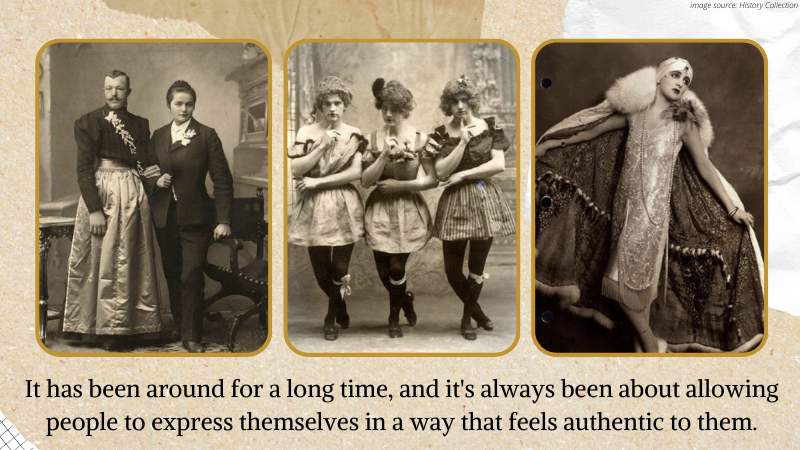 Drag allows people to express femininity and masculinity in the ways they want to. Drag is a form of performance art used by members of the LGBTQ+ community to express themselves. It is also an opportunity for people who do not identify as male or female to explore their gender identity. It has been around for a long time, and it’s always been about allowing people to express themselves in a way that feels authentic to them. 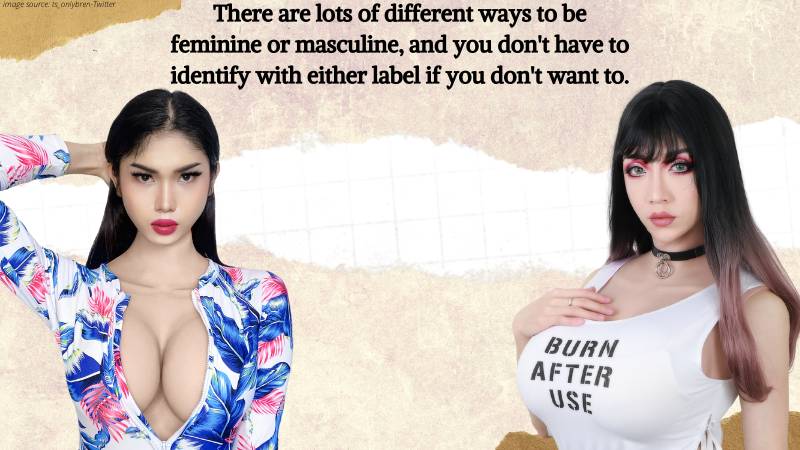 Drag has also helped to bring visibility to the fact that we don’t all fit into one box, and that’s okay! There are lots of different ways to be feminine, so you can explore more. It’s a way to show the world the person you are insid. It can be done in so many ways! 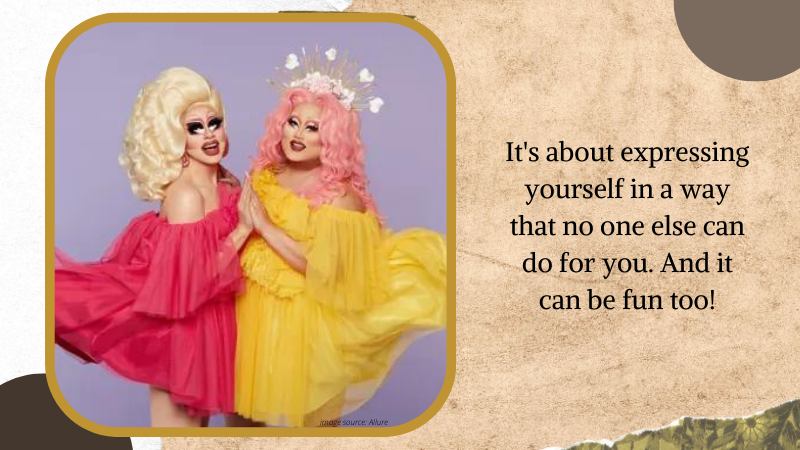 Drag is about more than just dressing up like a woman, though. It’s about expressing yourself in a way that no one else can do for you. And it can be fun too! I encourage everyone to explore this art form, explore their gender, and express themselves in whatever way they feel comfortable. 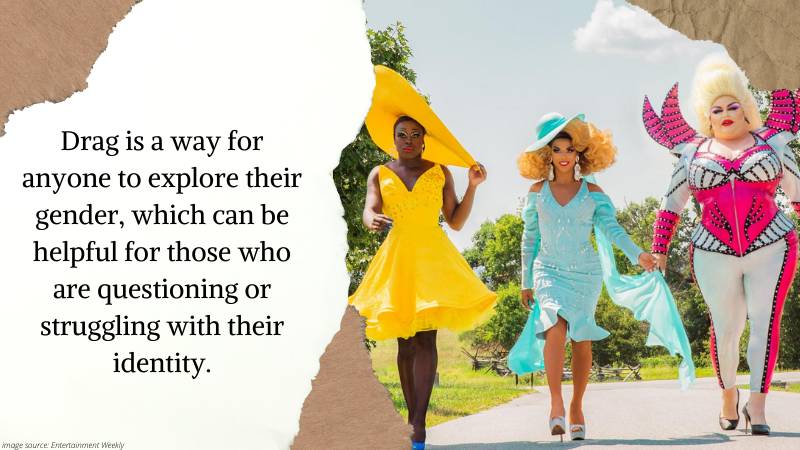 Drag helps with gender nonconformity. It helps people to be more confident and comfortable with gender. It can be helpful for those who are questioning or struggling with their identity. Drag can also help people feel more confident in themselves, especially if they have experienced body dysphoria or other problems with self-image. This is a way for all to express themselves and be who they are, even when the world around them doesn’t accept it. 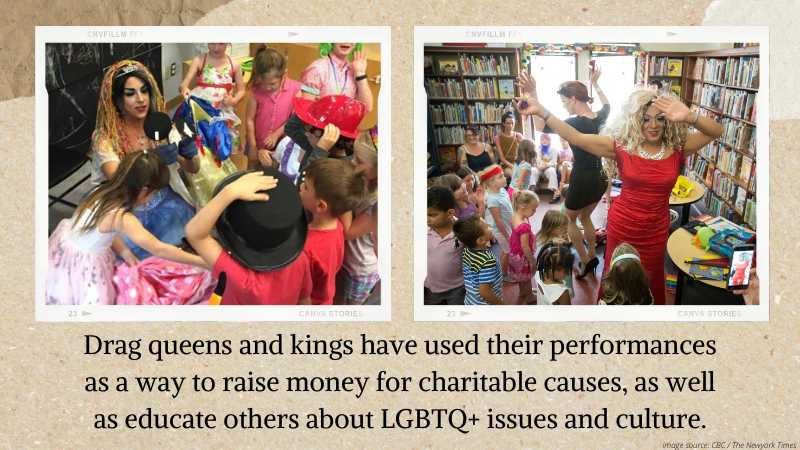 Drag helps us learn that we can be whomever we want, and gives us the confidence to do that. It’s a performance art that uses clothing, makeup, and often wigs to create a character. It’s also used as a way to get in touch with one’s femininity or masculinity. Drag queens, drag kings, or genderqueer are a very unique group of people. They go out of their way to defy social norms and express themselves in a way different from the mainstream. They are helping to make the world a better place by challenging what our society thinks about gender. Drag queens have used their performances to raise money for charitable causes, as well as educate others about LGBTQ+ issues and culture. 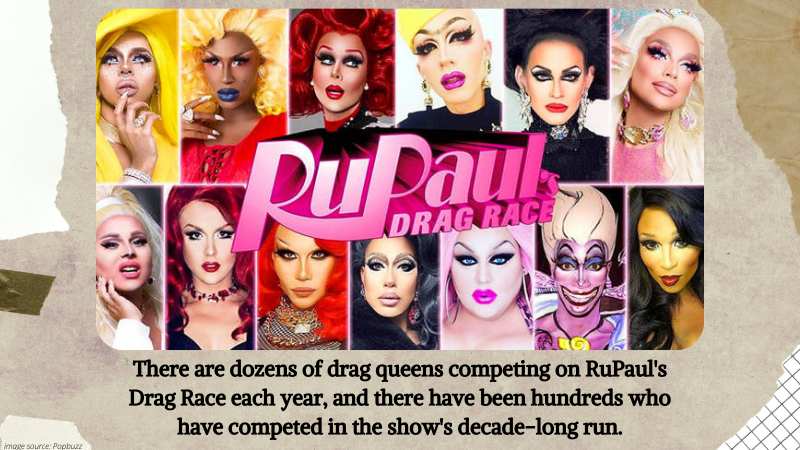 Drag perpetuates cultural and social understandings and notions of gender performance. It’s a form of performance art that exaggerates certain aspects of a person’s appearance, such as clothing or makeup. This exaggeration can be used to parody a particular gender or sexual orientation. Drag is more popular than ever, and it’s growing by leaps and bounds. There are dozens of drag queens competing on RuPaul’s Drag Race each year. There have been hundreds who have competed in the show’s decade-long run. 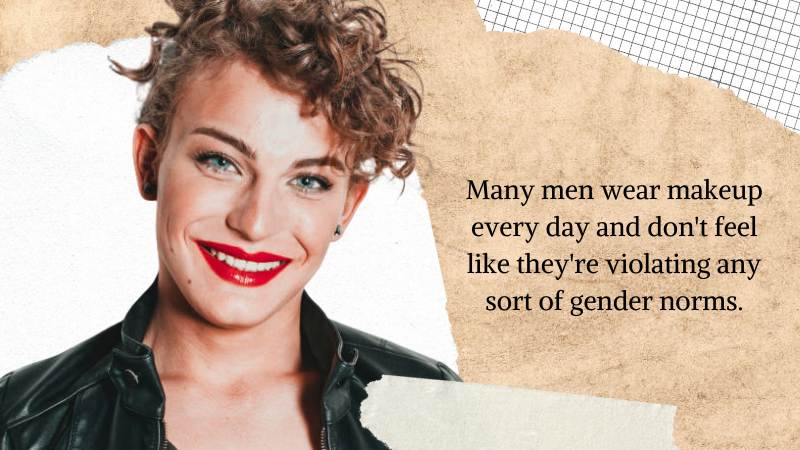 Drag is a way to transcend the notion of gender performance. It goes beyond cultural and social understandings of gender to provide a space for people to explore their own identities and the complexity around them. Society is with the idea that “men” can’t wear makeup or dresses because they’re “not supposed to”. However, many men wear makeup every day and don’t feel like they’re violating any sort of gender norms. More than wearing makeup drag has certainly made its mark in history and will continue to spread femininity as the years go by. 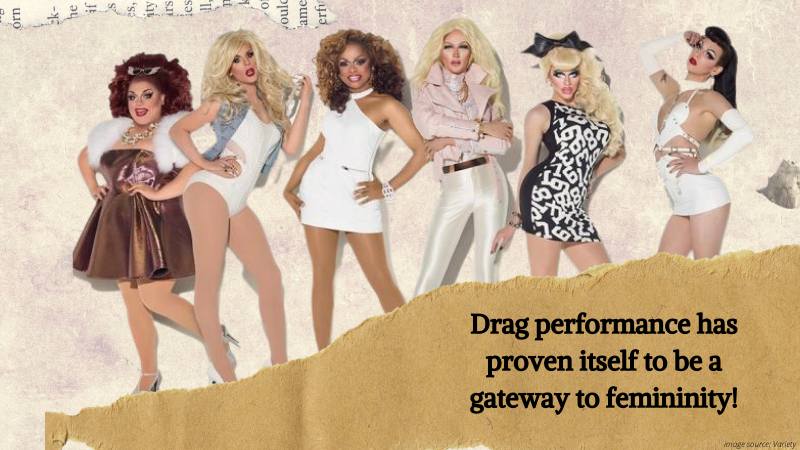 Drag performance has proven itself to be a gateway to femininity! It inspires others to be themselves unapologetically, opens up a space for everyone to explore that unknown part of themselves. It is truly a powerful tool for self-expression and discovery.