Crossdressing and transgender events are always a blast, no matter where in the world you go. But if you’re looking for some fun MTF crossdressing events in South America, you’re definitely in luck! There are tons of great options to choose from. 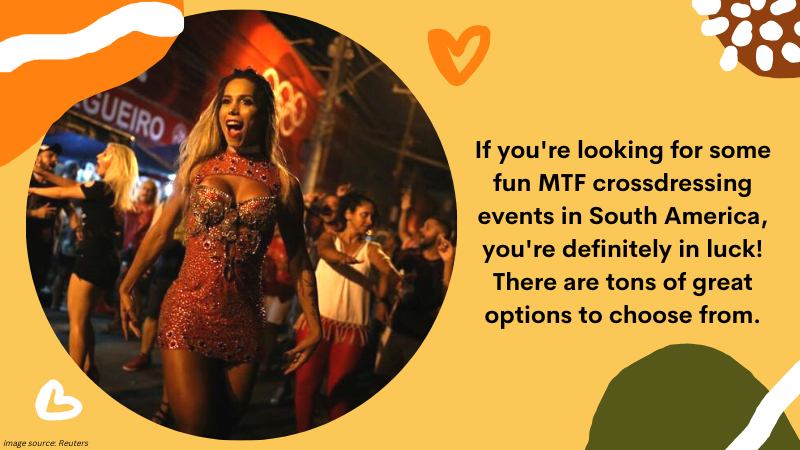 South America is a great place to be if you’re an MTF crossdresser or transgender person. There are loads of events and gatherings that take place throughout the year, catering to all sorts of different interests and needs. Whether you’re looking for social occasions, support groups, or just somewhere to express yourself freely, there’s bound to be something perfect for you.

Keep reading for a rundown of some of the best events in South America! 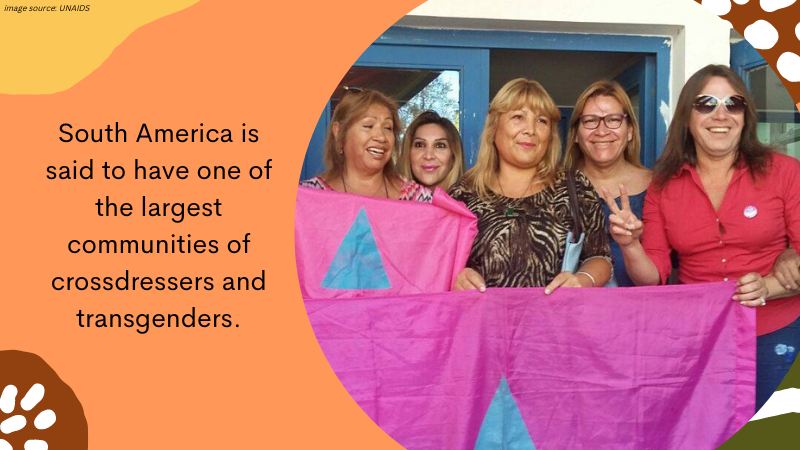 South America is said to have one of the largest communities of crossdressers and transgenders. That doesn’t necessarily mean we enjoy a good status in this society. We indeed have more visibility in South American countries than in most other nations, but that is mostly not in a positive way. At least not in a way perceived as “normal” or “equally respectful.”

Still, in the past two decades, we have received much more acceptance from the people, and more and more people are becoming aware of our issues. A lot of that credit is perhaps due to the crossdressing events held worldwide. 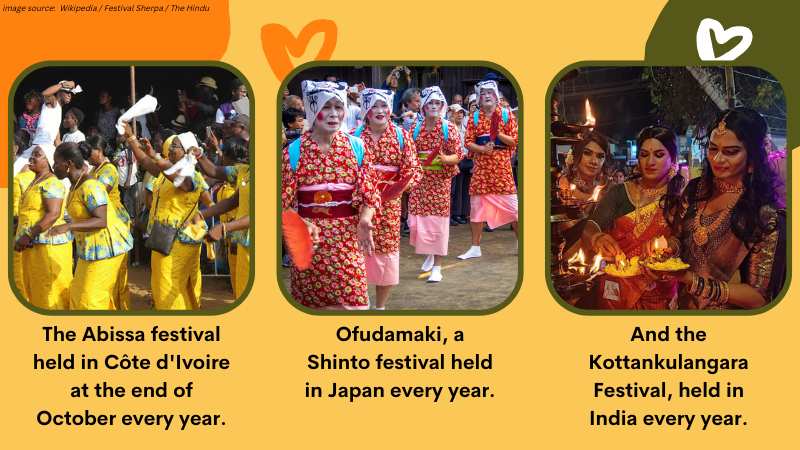 Cross-dressing is becoming increasingly popular, and though we are still largely considered to be members of the LGBTQI+ community, many of us are heterosexual and only crossdress for fun.

The History Of MTF Crossdressing And Transgender Events In South America 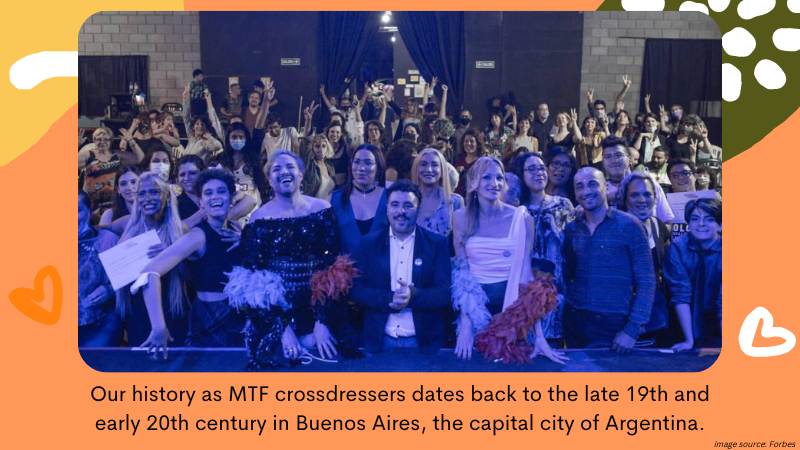 Our history as MTF crossdressers dates back to the late 19th and early 20th century in Buenos Aires, the capital city of Argentina. A complex and visible culture of transexuals and crossdressers extended to all the social classes, especially the upper class of Buenos Aires.

One of the first historical records of gay life in Buenos Aires is the criminal careers of several crossdressing swindlers that hygienists were profiling. Back in the day, being a crossdresser ultimately made you one of them. 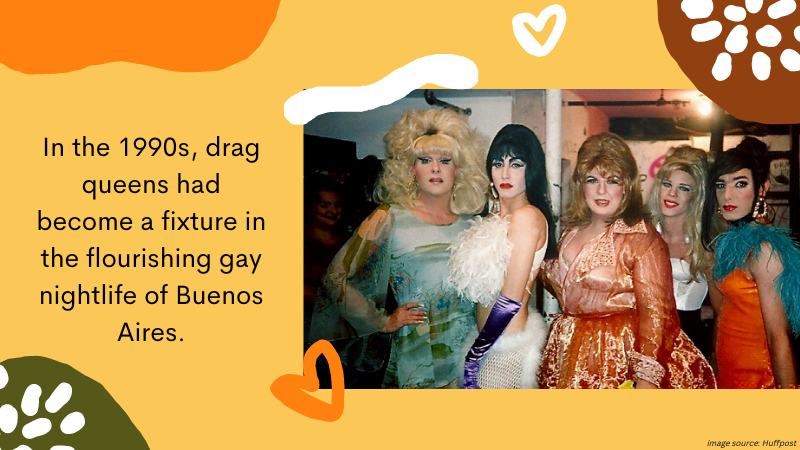 An article published in 1912 by Fray Mocho (an Argentinian weekly magazine) reported that this gang of crossdressing criminals was made up of about 3000 men, which, at that time, made up about 0.5% of the male populace of Buenos Aires.

Several testimonies state that crossdressing balls were arranged in secret and were largely popular among middle and upper-class gay men in Buenos Aires in the early-to-mid 20th century.

In the 1990s, drag queens had become a fixture in the flourishing gay nightlife of Buenos Aires. By 1995, we had gained a lot of popularity, and the stigma against us was largely removed. 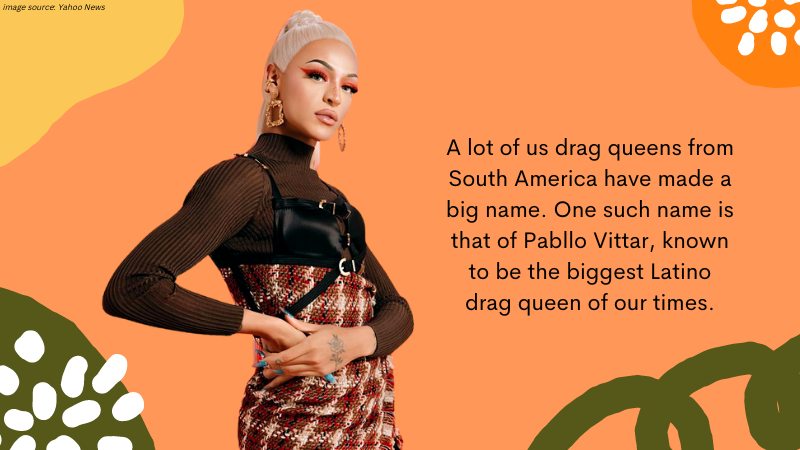 A lot of us drag queens from South America have made a big name. One such name is that of Pabllo Vittar, known to be the biggest Latino drag queen of our times.

Vittar chose to use a masculine stage name (his real name is Phabullo Rodrigues da Silva) because he wanted to be truthful to the public since he is not transgender. He only acts as a woman on stage as Pabllo Vittar and claims to have a more typical masculine gender expression in his private life. Most of us are the same as Vittar.

How To Participate In MTF Crossdressing And Transgender Events In South America? 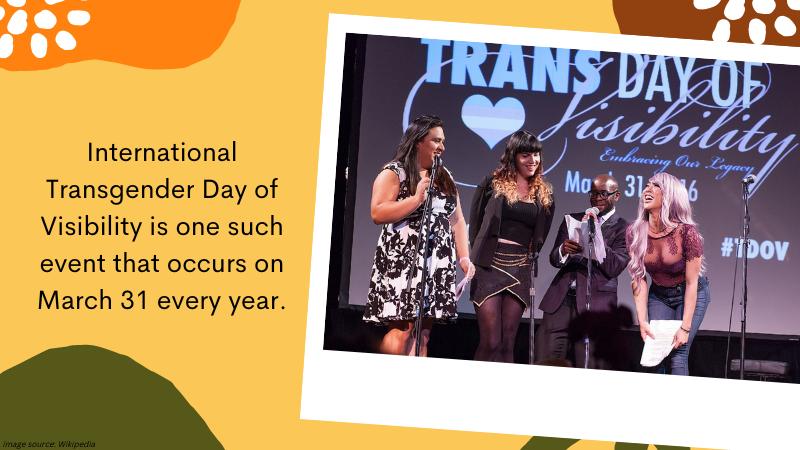 There are a lot of ways you can participate in crossdressing and trans events, ranging from cultural festivals to parades.

International Transgender Day of Visibility is one such event that occurs on March 31 every year. It is dedicated to celebrating our community and their contributions to society in various fields, and awareness is also raised among the masses about the discrimination we face worldwide. 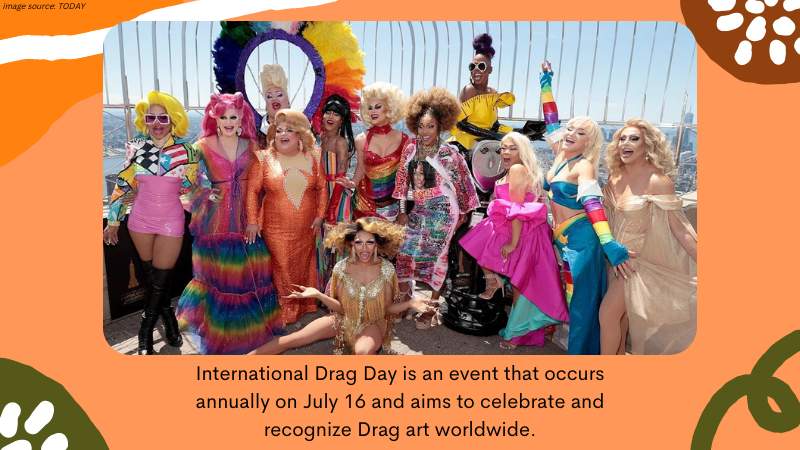 The first International Transgender Day of Visibility was held on March 31, 2009, and was founded by transgender activist Rachel Crandall of Michigan.

International Drag Day is an event that occurs annually on July 16 and aims to celebrate and recognize Drag art worldwide. It was started in 2009 by Adam Stewart through a fan page for Drag queens that he had created on Facebook. The main objective of this day is to provide us with the right space to expose our creativity properly and Drag culture. 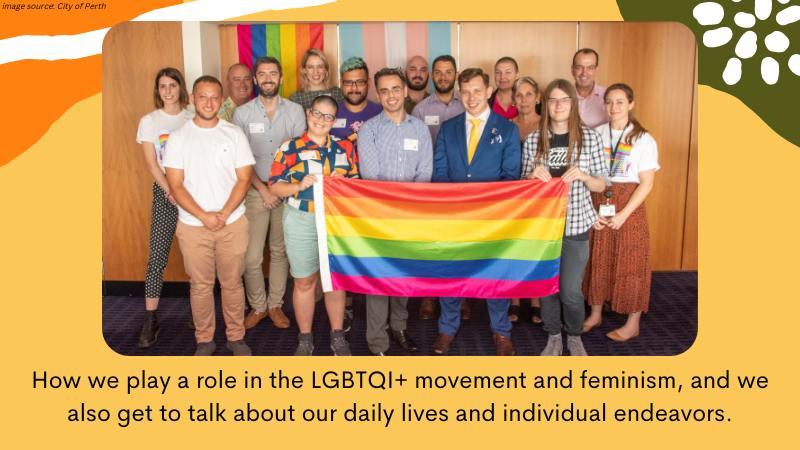 Along with the art shows and performances, the events on International Drag Day host discussions and debates about our rights and situations in different countries. How we play a role in the LGBTQI+ movement and feminism, and we also get to talk about our daily lives and individual endeavors.

What To Expect At MTF Crossdressing And Transgender Events In South America? 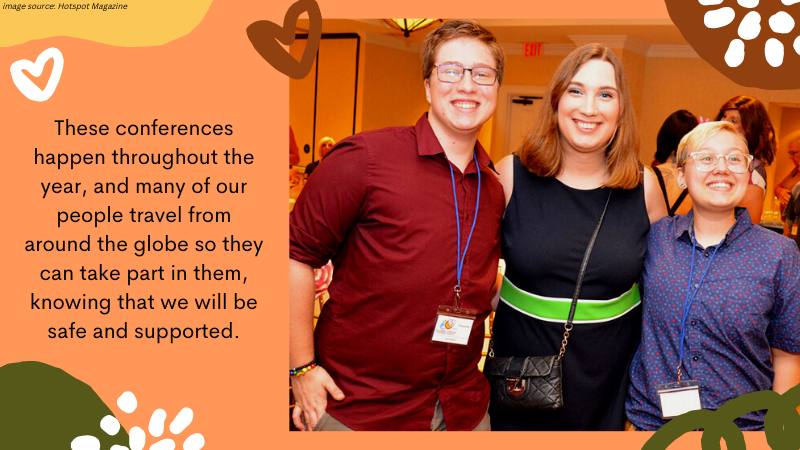 Transgender conferences are a famous and highly preferred way for our new members to interact with each other and make friends. These conferences happen throughout the year, and many of our people travel from around the globe so they can take part in them, knowing that we will be safe and supported.

Conferences are a place of reunion, socializing, and learning for us. For most of us, these conferences act as total immersion events for the time spent there, i.e., you get to present for the entire stay in your chosen gender. As for the first-timers, I’d say this is your chance to present your authentic female self in public. 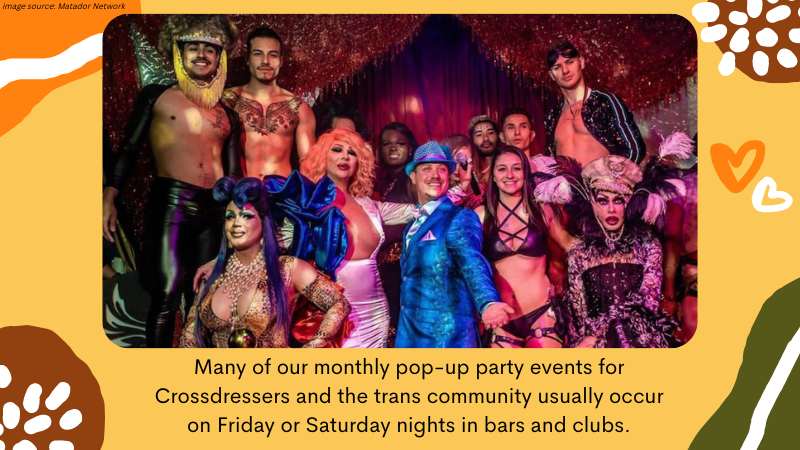 We have transgender and crossdresser support groups that aim to provide a safe, supportive, and social setting for non-binaries, including trans people, crossdressers, and anyone that does not identify as their assigned gender at birth.

Many of our monthly pop-up party events for crossdressers and the trans community usually occur on Friday or Saturday nights in bars and clubs. These events are intended to be purely social, where we meet to socialize and dance the night away. 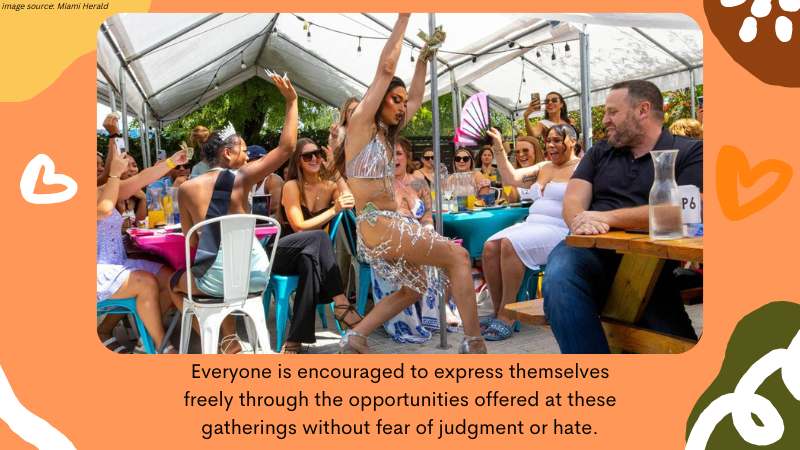 A Pride event is where you are invited and encouraged to gather with others as your true, authentic self. Everyone is encouraged to express themselves freely through the opportunities offered at these gatherings without fear of judgment or hate. Pride events often include a march or a parade. June is pride month; we hold most pride events alongside the LGBTQI+ community. 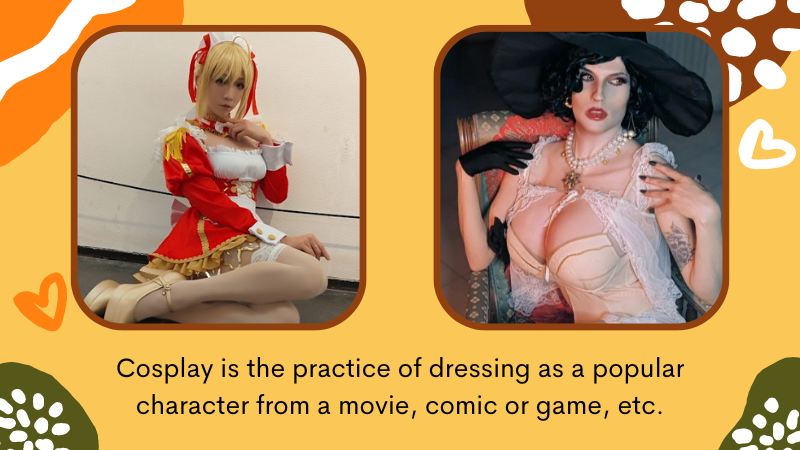 We love to attend cosplay events where ‘crossplay’ is actively encouraged. Cosplay is the practice of dressing as a popular character from a movie, comic or game, etc. Crossplay is cosplaying as a character of the opposite gender.

Cosplay is immensely popular among MTF crossdressers, and we garner positive attention at these events as we add a spark to otherwise common cosplays.

The biggest cosplaying events we love to crossplay are at our New York Comic-Con and San Diego Comic-Con, where thousands of us gather, both cosplayers and those who only want to take our photos as their favorite characters. 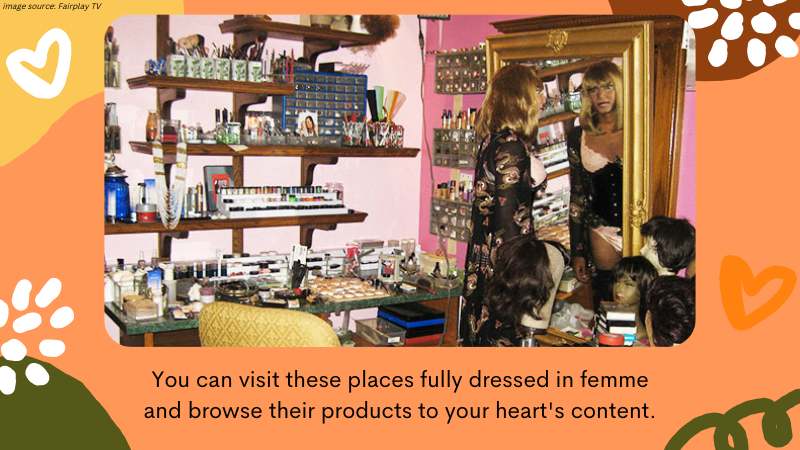 Only a handful of specialty stores cater to our needs anymore, and they are an oasis. You can visit these places fully dressed in femme and browse their products to your heart’s content. These specialty stores usually include shopping for specialist garments; sometimes, makeover services are also available.

Such stores are usually run exclusively for our community and mostly by our community. That is why the staff is very understanding, and you won’t have any issues with sizing and other privacy concerns. 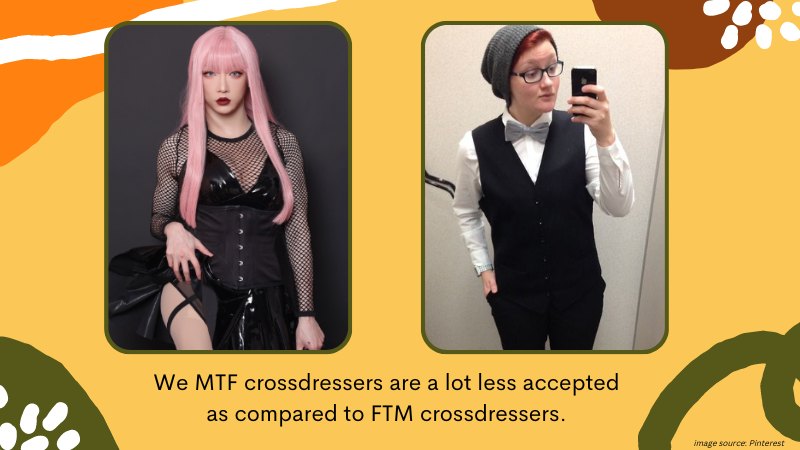 We MTF crossdressers are a lot less accepted as compared to FTM crossdressers. This is due to the stigma of Macho Sexism which has been increasingly popular throughout history. The same is true for transgender as well.

There has been a lot of hate and criticism towards the members of the LGBTQI+ community and us, especially in South America. The reason is that South America is largely catholic compared to its northern counterpart. And sadly, for most of us, getting murdered is a constant threat. Because of that, many of us choose never to come out of the closet.

We constantly suffer in our personal lives and relationships and are afraid of prosecution if we ever come out.

This is why we need to have such events, to raise awareness and normalize transgender. In our events, non-crossdressers participate as well, some out of curiosity and some that are queers and have not realized their authentic selves yet. These events help to bring about a supportive and encouraging system for everyone.